Getting Started with the Beaglebone Green Wireless 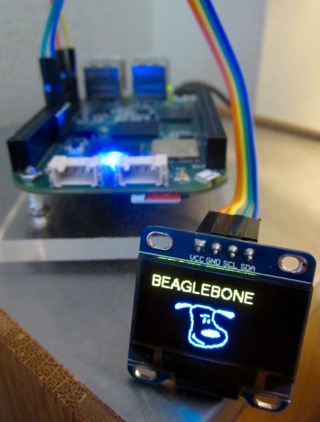 Getting Started with the BeagleBone Green Wireless ARM Computer

I recently acquired yet another small GNU/Linux-based computer - Seeedstudio's BeagleBone Green Wireless. Thanks to an enthusiastic endorsement and a pass-around at a local Linux users group meeting (we like to do 'Show and Tell' with different gear), I started looking in the BeagleBone line of computers. The original board only had 256MB RAM, while the latest BeagleBone Black has 500MB - but only one USB port and no built-in wifi. This was kind of a deal-breaker for me (although I'm sure there are many satisfied owners). And there is a BeagleBone Green, which appears to be about the same computer minus an HDMI port. I'm used to headless GNU/Linux boxen, so no HDMI wasn't a deal breaker. But I like the idea of built-in wifi. So when I saw the BeagleBone Green Wireless, along with its four USB ports but still minus HDMI, I took the plunge.

This page is my experience with the BBGW as I call it. I'll update this page as I go along (much of the initial info was from my Amazon review - i hope it helps to get more folks interested - especially n00bs like me).

Where to start? How about this: Here is my 10-Step 'HOWTO' on how i got the BBGW 'out of the box' to work standalone on my network.

1. I first navigated to BeagleBoard.org's 'getting started' web site.

2. Since I don't use any Microsoft products, I downloaded and installed the HoRNDIS and FTDI drivers for my Mac, and then rebooted.

3. Then I attached the included stubby USB cable to the BBGW, and plugged it into my Mac.

4. The BBGW booted, and I waited until two of the USR lights on the board started to 'dance' in unison.

5. Next, I selected the 'Beaglebone' wifi Access Point (which didn't require a password). NOTE: It's not necessary to do this! Just if you want to see the 'Getting Started' stuff. Also note: If you see another 'Beaglebone' wifi AP, but it requires a password, use 'BeagleBone' (finally found that buried in /etc/network). You'll also see a FAT-formatted partition on the BBGW mounted on your system.

6. Next, I opened a Terminal, then SSH'd into the BBGW with: ssh root@beaglebone.local. (This was possible due to the RNDIS driver, which allows networking over USB)

7. To start WiFi configuration, I then ran the connmanctl program from the command line. (Do a web search on "Debian wifi how to use" to see the exact steps or read below on this page).

8. I then quit the connmanctl program after wifi was configured and shutdown the BBGW.

9. Disconnected the BBGW from the USB cable.

10. Attached a 5V power supply to the micro usb and rebooted - then SSH'd into the BBGW standalone. If you log in as the user 'debian,' the password will be 'temppwd'

There's a lot to like about this Texas Instruments-CPU'd device... 4 USB ports are welcome here, along with the 1GHz CPU... and honestly, only 500MB RAM isn't too hobbling due to the low memory requirements of most ARM clients... lots of little LEDs and lights (nearly all controllable through software)... the four USR lights are especially handy as an indicator of power, CPU, microsdhc (card slot) and Emmc activity. (The 'heartbeat' and CPU LEDs 'dance' in unison when the system is a'runnin'!). And I think the built-in 4GB eMMC storage was a brilliant addition - quite handy!

And 69 (65-addressable, IIRC) GPIO ports! there are going to be plenty of accessories for this computer! not only that, but you can also get many different cross-hardware-platform sensors to attach to this device.

This is a nice little GNU/Linux computer, but honestly, the documentation is very lacking and for a n00b very confusing... the example 'howto' sheet included with the BBG didn't work for me - but then, where do you go? do you use BeagleBone.org's info? or Seeedstudio's BeagleBone Wiki? or the eLinux Debian wiki? who provides the best single-point of support? (hint: it ain't Seeedstudio)... i did get a friendly few comments on the beaglebone IRC channel, but getting this thing up and running from scratch, especially if you don't know GNU/Linux, is going to be a challenge for some folks.

At this point i have a fully functioning BBGW. But boy howdy, those included wifi antennas are hideous, aren't they? But then again, some folks (especially Amateur Radio ops like me) love antennas. I haven't tried the antennas yet as the built-in wifi connects just fine to my AP 20 feet away. The small ceramic wifi antenna on one corner of the BBGW's board is more than adequate for my use - it may be interesting to do some antenna modeling of the performance of the two antennas (which look like two tiny amateur radio Buddipoles)

This is a new product, so give it some time to garner support and popularity... but if you're new to GNU/Linux, especially on the ARM platform, a Raspberry Pi3 might be a *much* better device to start with - just MHO, YMMV. However, if you're a die-hard embedded device programmer wanting to scratch a real-time performance itch, this could be your dream device.

There's no HDMI on this unit. I ordered, then tried an HDMI 'cape' - and at the time of this writing it is not supported under the 4.X.X-series of Linux kernels. I may explore a USB 2.0 HDMI adapter at some point. I hope the HDMI cape will be supported in the future, and will update this page when it works.

The only real base system configuration needed was to have the correct timezone. A simple:

fixed that for me.

Obviously you'll use either awk or cut to extract just the number:

I haven't dug into the kernel source to see how the number is extracted. There are a few handy CPU-related utilities under /usr/bin:

You'll find other info under the /sys directory:

A number of these values report "
Posted by willie at 6:45 AM