My father-in-law gifted me his father's Smith and Wesson Safety Hammerless. This double-action revolver was made from 1887 to 1940, and features an internal hammer and a Daniel B. Wesson-designed external grip safety on the backstrap. My revolver is chambered in .32 S&W. The first .32 S&W model was introduced in 1888. The revolvers were discontinued prior to World War 2,

The serial number on the revolver traces to pre-1909 manufacturer, but this is not the first, but is the second version of this revolver. The first version, also known as the New Departure or the Lemon Squeezer, used a black powder cartridge. Minor changes to five different models were made over the years, but I believe this is an example of the second version due to the pinned front sight. 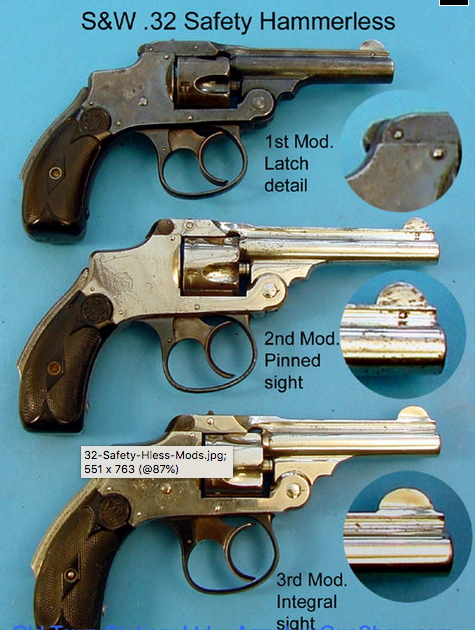 After a thorough cleaning before heading out, I put 50 rounds of Magtech's S&W .32 through the revolver at the local indoor range - the first time it had been fired in more than 100 years. It initially shot a bit high and to the left, but I got my point of aim easily.

I'm pretty happy with the results at 5 yards: 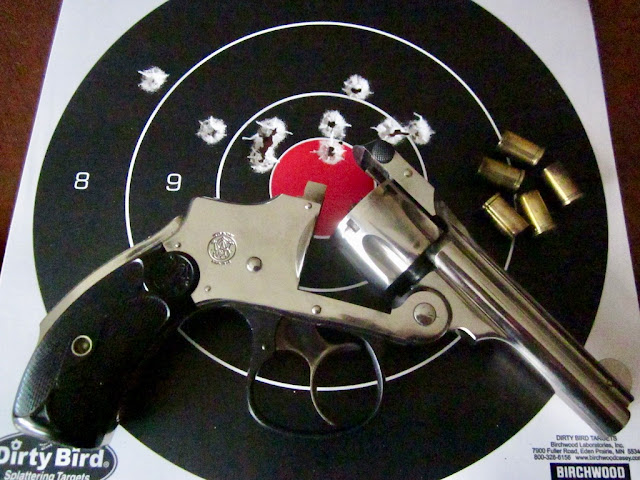 Cleaning the revolver is very easy. The secret is the take off the cylinder. You do this by opening the revolver, letting the extractor snap back in, then holding the latch back and spinning the cylinder up and off. You can then clean up with straightforward strokes of a brush or swab.
Posted by willie at 10:54 AM