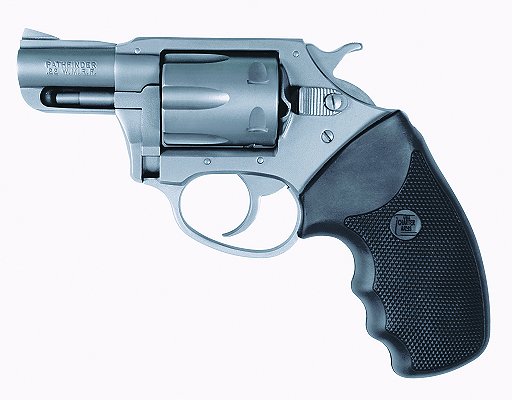 The Pathfinder Snubby in .22 WMR - Tips and Projects

Boy howdy, it seems like there are some Charter Arms haters out there! There seem to be some folks who definitely do not like the company or its products (one poster said he got a nasty email reply from the owner at one point). I don't know this company's history and I'm not sure what kind of  revolvers were manufactured by the company during the brand's recent 'junk' period, but I decided to take the plunge and purchase a 2018-made Pathfinder with a 2" barrel chambered for .22 magnum.

A recent search for a rimfire snubby with a bit more punch than .22LR found me handling a Ruger LCR .327 Federal Magnum revolver, which I instantly disliked due to its sharp and obtrusive trigger guard - not good for my hands.

And there aren't many currently manufactured snubby revolvers for .22 magnum (discounting North American Arms). The top of the heap would be Smith and Wesson's 351 C and 351 PD, but I'm not going to spend $800 for a revolver with a Clinton lock.

The Charter Arms Pathfinder has no such nonsense incorporated into its design. Basic specs on my new Pathfinder (stolen from Charter Arms' web site):


My kitchen scale told me that the revolver weighed 1 lb, 4 oz. unloaded, so the above weight info is wrong.

So what do you get? Well, the revolver doesn't have a finely polished finish. There was a small spot of finishing abrasive in one of the frame pin dimples on my revolver. The fit and finish is yeoman-like, but not award-winning. The revolver's latch mechanism, although it works, is kinda funky and feels cheap.

On the positive side, this is a relatively inexpensive revolver that works. In .22mag it's like the snubby has a bull barrel, which is a good thing, as the revolver can heat up if you pump out 100 rounds through it in a single hour like I did on its first outing.

Here are the first six rounds through the snubby - in single-action with my wrists resting on my range bag - i wanted to see how the sights were aligned - btw, the revolver had been fired at the factory with a full cylinder, evidenced by fouling - always, always, always clean your weapons out of the box!: 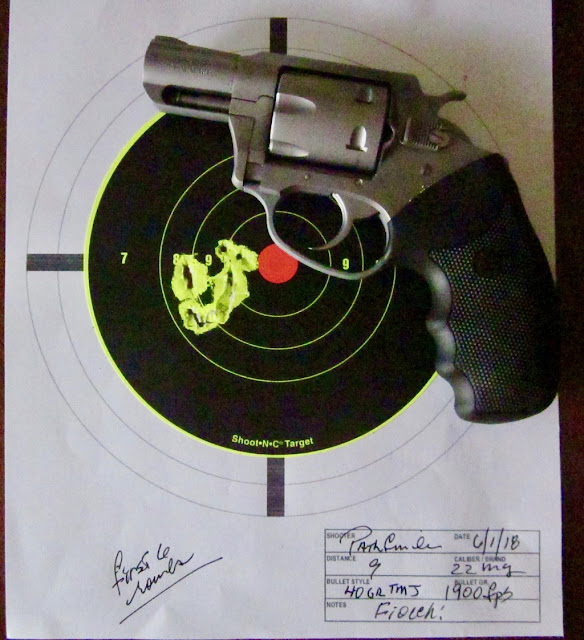 The Fiocchi 40 grain TMJ at 1900fps wasn't too bad and not really a handful. The revolver shot a bit left and low (to me), but I was able to follow up with different ammo and hit the bull in single-action, even another yard away: 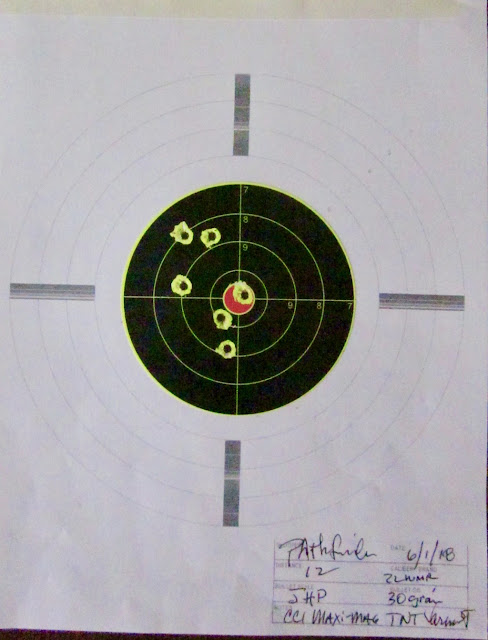 The CCI Maxi-Mag TNT Varmint 30-grain at 2200fps had a bit more punch but was on point and accurate. This was what I was looking for. However, I was even more impressed with CCI/Speer Gold Dots, a 40-grain lower (1050fps) round (note the one flier - I pulled that one): 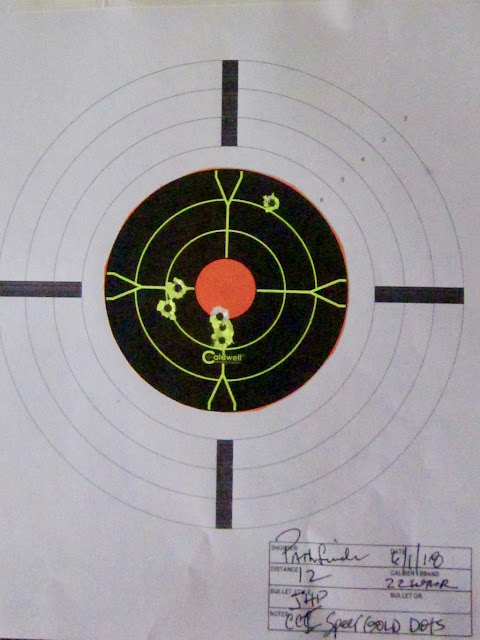 Finally, I finished up my snubby's first 100 rounds with some double-action: 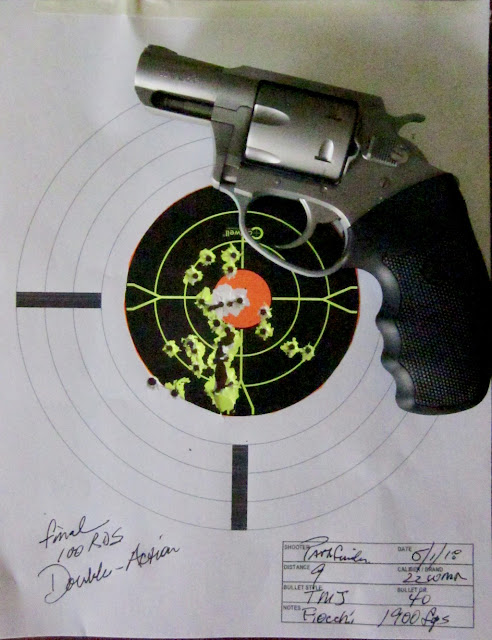 
I was able to extract all rounds, although as the cylinder warmed up, the Fiocchi cartridges were a tad hard to get out (had to punch with my palm) - but no stuck cartridges. One thing I did notice with this revolver was that after loading and pushing the cylinder in, the cocking was easier if the cylinder was in time - not really a problem - had no trigger issues (although disappointingly, I did have two Fiocchi rounds fail to fire on first strike - a second strike was OK - no such problem with the CCI ammo).

UPDATE: When I got home, I took a bronze brush wrapped with copper fibers and scrubbed each chamber in the cylinder. I then cleaned the cylinder, wiped each chamber dry, then followed up with Simichrome polish, and thoroughly polished each chamber, again going in the direction of the brass - back and forth, not in a circular motion.  I then again cleaned and dried the chambers.

The result? At the next range outing, with the same ammo and same number of rounds (two boxes of Fiocchi - 100 rounds), I was able to extract spent brass just using a hard finger press - no punching required - this is very nice! I'm really starting to like this revolver!


Regarding the trigger: I found double-action to be very nice and smooth, and could hear/feel the first stage 'click' even through my ear protection. Single action was very good, crisp and light with a clean break. I had no trouble keeping on target in double action. This would be a very fabulous revolver in 3-inch with an adjustable rear sight (I already have a Smith 317, so that's why I went with the snubster instead of the 4-inch Pathfinder).

You can easily turn this pistol into a hammerless double-action only revolver by purchasing a spurless hammer from Charter Arms for less than $25 - that's nice! (or you could just grind off the spur on your hammer - LOL!)

There are some maintenance videos on cleaning and taking apart this pistol. Charter Arms also sells a simple tool that makes working on the cylinder latch a lot easier - I may invest in it at some point.

Modifying the HKS 51J Speedloader and Making a Loading Block

I was unable to not only not find any cheap loading blocks, but unable to find *any* loading blocks for this pistol. And I'm certainly not going to pay nearly $100 for a box w/blocks.

The first problem you'll find when trying to use the HKS speedloader is that while it fits the cylinder chambers, you won't be able to speedily load your revolver. Why? Because not only does the stock rubber grip get in the way, but so does the smaller plain wood grip!

Now, if you go by the HKS folks recommendation, you'll need to modify the grips (according to the back of the speed loader's package): 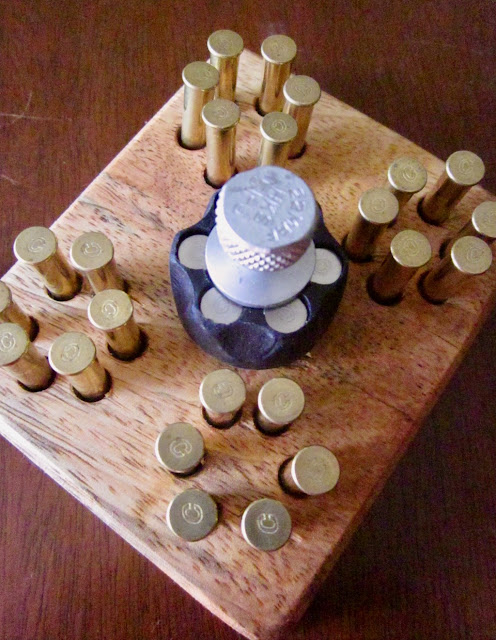 I took a scrap piece of the hardest wood I could find in the garage, then used a small awl to pinpoint drill points for five load points on the block. Using a hand drill, I then started off with small bits and progressed to a bit sized for the .22 magnum. Using a bit of extra rotation, I slightly enlarged each hole, then changed to a conical grind bit to add a very slight chamfer (bevel) to the lip of each hole.

The speedloader was modified (as shown) by adding an indent between each round hole, then sanding a bevel around the top of the loader using a little drum sander on a Dremel. I think I also slightly sanded the circumference of the loader. After this, the speedloader easily slides into position with the rounds and doesn't run into clearance issues with the grip. This speedloader and loading block are ready for the range!

And if you want to keep things a bit more tidy, size your loading block to fit inside an "MTM 200 Round Small Bore Ammo Box" (currently less than $10). I cut out the plastic center section, then reversed the two ammo holders to present solid sides to the loading block, which sits flush with the bottom of the box: 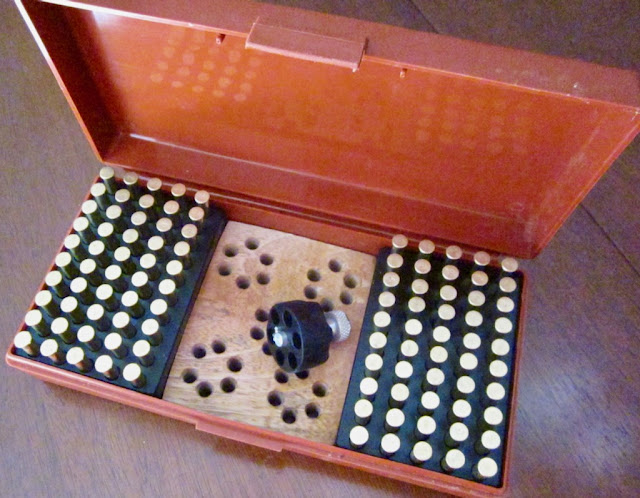 I continue to be impressed with this revolver. Here's a pic from a range session today: 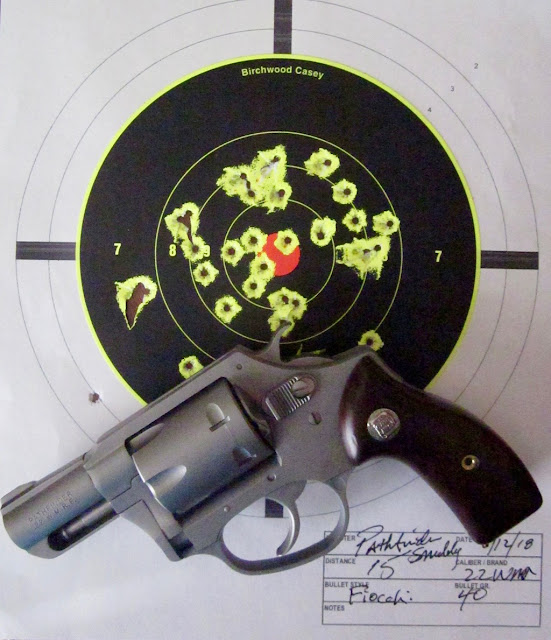 And then, a little round-robin a bit closer with smaller bullseyes: 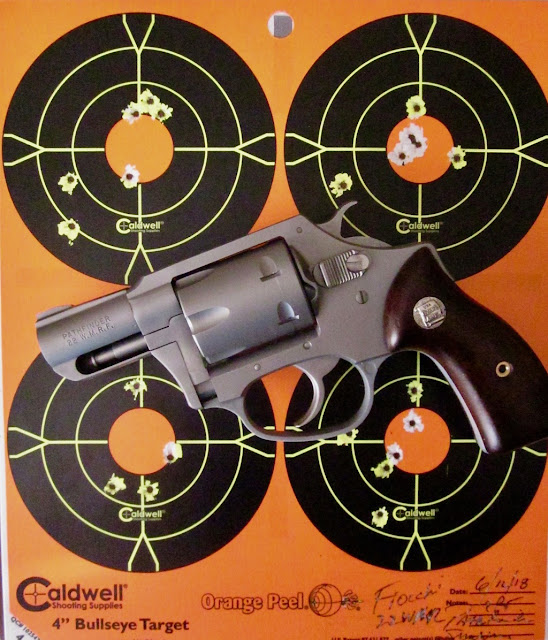 Holster for the Pathfinder Snubby

If you're looking for an inexpensive leather holster for your snubby, the Charter Arms folks offer a very reasonably priced Italian leather version for less than a Jefferson; you can easily slip off the belt clip if you just want a simple transport or pocket leather: 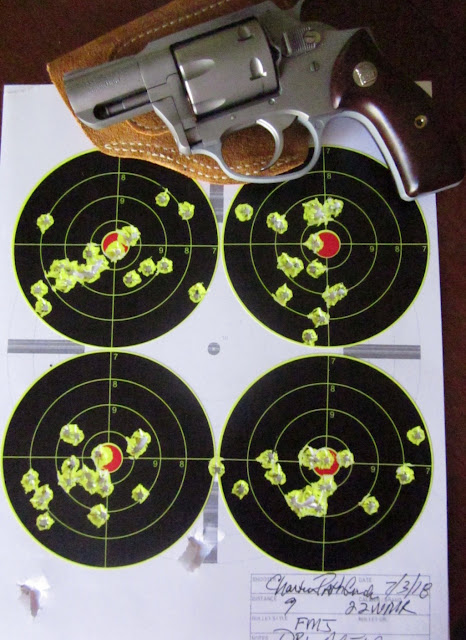 So there you have it. I'm more than happy with the accuracy of this snubby. I see no reason to practice out to 25 yards, let alone 25 feet. But for close-in work, this little snubster looks like a winner - especially in the pocketbook.