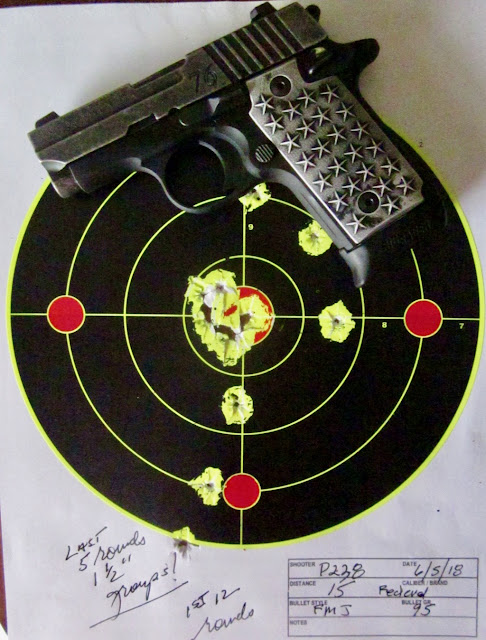 Gotta love marketing, especially when combined with exceptional quality and manufacturing. I don't buy Swiss watches, but I recently took the plunge on a SIG Sauer P238 that just spoke to me from the display case of a LGS. This was totally out of character for me, as my main interest is in small calibers (.32ACP and rimfire). In fact I had just sold off a .380ACP pistol that I had for more than 25 years - a Beretta 84B - too big for carry or even the bedside table drawer.

At one time long ago I also owned an Iver Johnson Pony 1911. It would only reliably eat Federal FMJ, and it was a handful to shoot. But there were a few things about this P238 that I liked right off the bat:

- lightweight - less than a pound
- great ergonomics - feels good in the hand
- nice daytime sights
- price (got a nice discount from the dealer)
- SIG's reputation - this is a quality piece of tooling
- simple break down - single tool-less lever
- came with two 7-round magazines
- apparently a popular model - lots of 'em out there - more parts, etc.

So it was off to the range after an initial take down and cleaning. Taking down this pistol for the first time wasn't a lot of fun, but then again, either was my Beretta 84B. After removing the magazine and taking off the safety, I finally figured the correct point to line up the slide with the lever. Cleaned up the pistol, remembering this caveat:

(Apparently some very bad thing will happen. I need to read up on this one.)

Reassembly also comes with a caveat:

ALWAYS ALWAYS PRESS DOWN THE EJECTOR UNDER THE SLIDE IN REASSEMBLY

Oops! How to Fix a Fallen Ejector


If you push the ejector down too far, it will fall into the frame. You now have some work to do.

Here's one version of the fix:

If the linky fails to work, here are the basic steps, according to 'bumper' in cited thread (note he does not mention turning the pistol upside down while pressing the sear spring):

3. The left side of the sear/ejector spring is for the ejector, it's the side with the small 90 degree forward bend or "hook" at the top. The front edge of that hook is supposed to be in the little notch at the bottom backside of the ejector. This rounded notch is facing upwards now as the ejector has rotated forward too far.

5. Replace mainspring housing retaining pin. When using screwdriver or similar to push ejector side of spring back, you may want to wrap tip of driver to avoid scratching spring.

If this sounds too complicated, watch a video. Here's a link to a 'tube vid on the fix:

Interestingly, the original Colt Mustang's (the P238's older twin) manual has a short section on this problem, and a short description of an easy fix with two pictures: 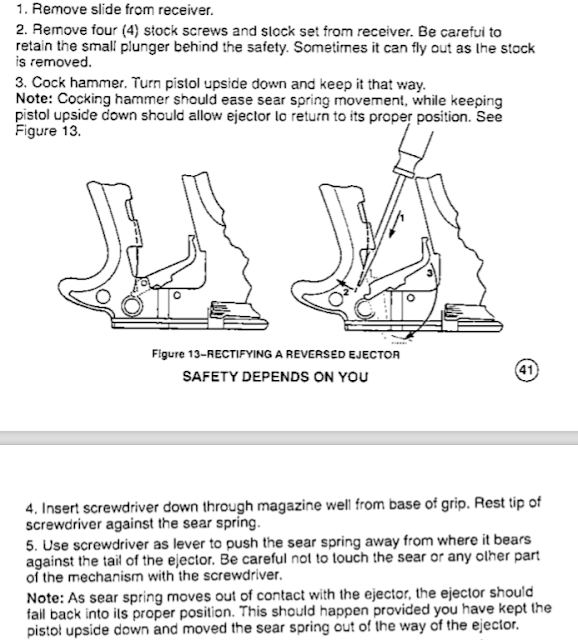 So there you go. Gravity is your friend in this fix!

Anyhow, after checking the P238's function, I was ready to go.

I still had a box of 13-year-old Winchester 95-grain FMJ FN (flat nose), but also bought a box of Federal FMJ from Wally World (great place to shop for ammo late at night!). My first 12 rounds looked like this: 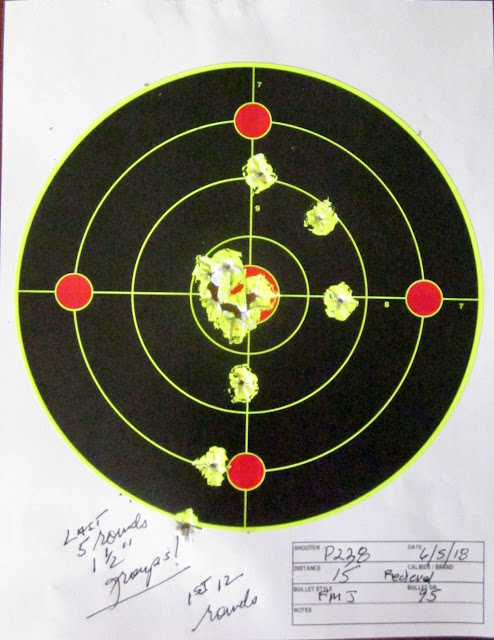 The first six rounds were me getting used to the recoil and retort of the pistol. But note the last five rounds: All on the bullseye. This pistol needs absolutely no sight adjustment! It shoots point of aim! Lining up the dots under the bull resulted in a nice 1.5" group! Wowzers!

Here are few other targets: 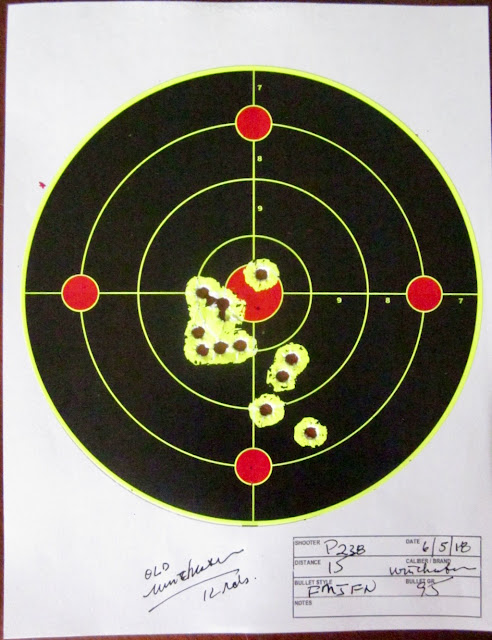 Looks like I got my money's worth 13 years ago with this .380ACP. I then did a 'round robin' (clockwise from upper left) with smaller targets using 5 rounds per magazine. I guess I was a little tired by the time I got to the tiny center bull, but this pistol worked for me: 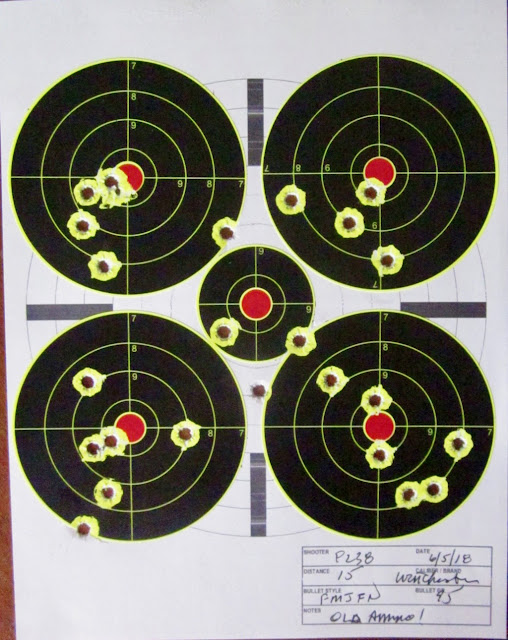 There were no malfunctions whatsoever with the old ammo or several magazines of the new ammo.

And here's a companion knife for this pistol - I like my Sebenzas: