The Ruger Charger has been around for a while. Some folks didn't get the pistol's concept at first, but those who know about the Charger know that it is a really nice and accurate 10/22 in pistol form. And because it is a pistol, you can configure your Charger to the way that works for you, much like the entire 10/22 platform.

My new range toy is economical, convenient, and a pleasure to shoot. 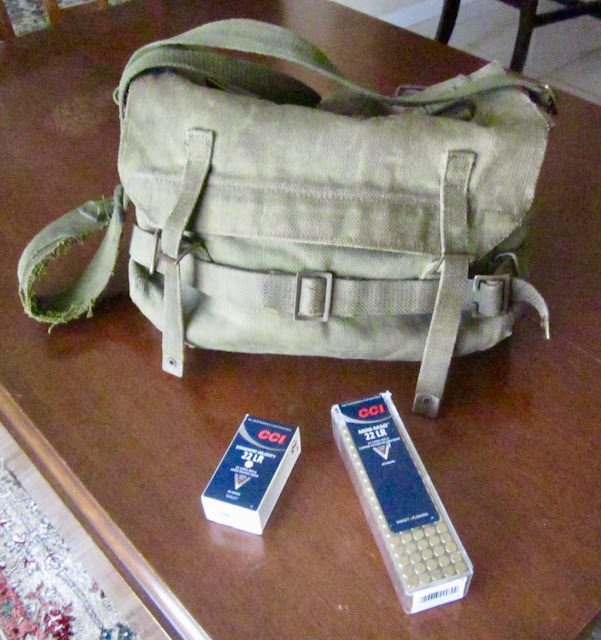 Well, what's in the bag is the toy: 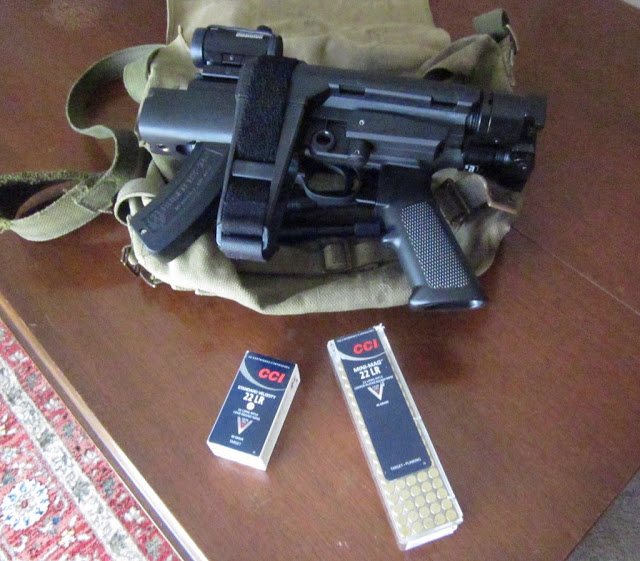 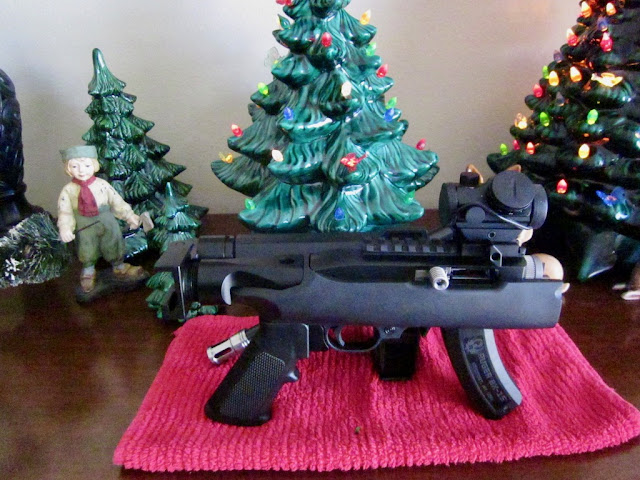 But conveniently packed and then unfolded: 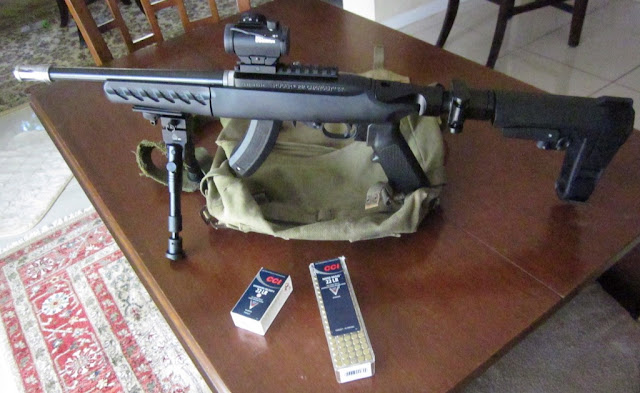 This is a Charger in the factory configuration, but sporting a Copper Custom adapter, a folding adapter, and an SBA3 pistol brace. Here's the magic that makes this happen  - a Leapers UTG folding adapter - not really for heavy duty weaponry, but fine for rimfire sporting (on a PMACA chassis): 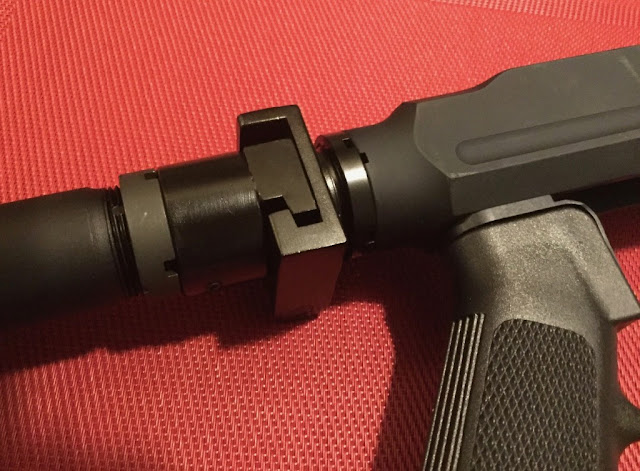 Decent accuracy at 25 yards, and I'm sure that with a bit of tweaking and a higher-power scope, you could be hitting quarter-sized groups out at 100+ yards. This Ruger Charger Takedown is very comfortable with its pistol and arm brace. I use the bipod folded down as a foregrip.

Here are some results using Aguila SV at 25 yards with a Bushnell TRS-25 red dot: 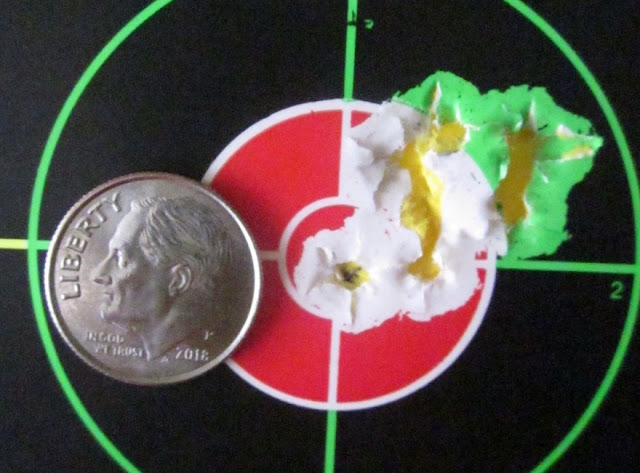 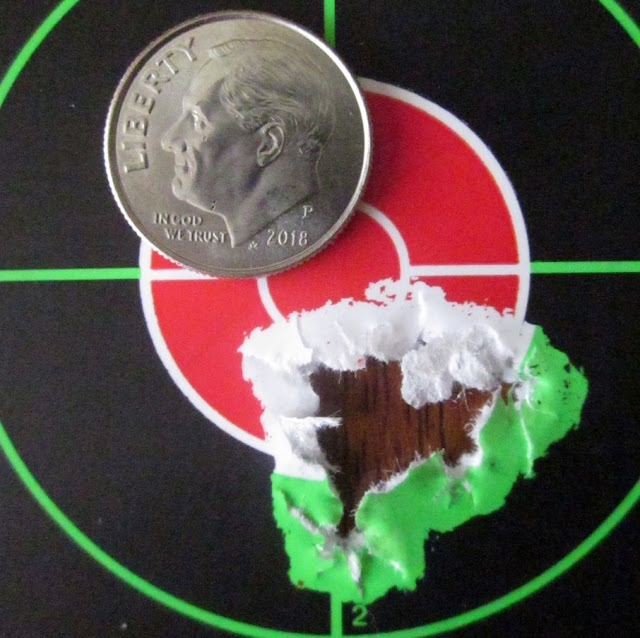 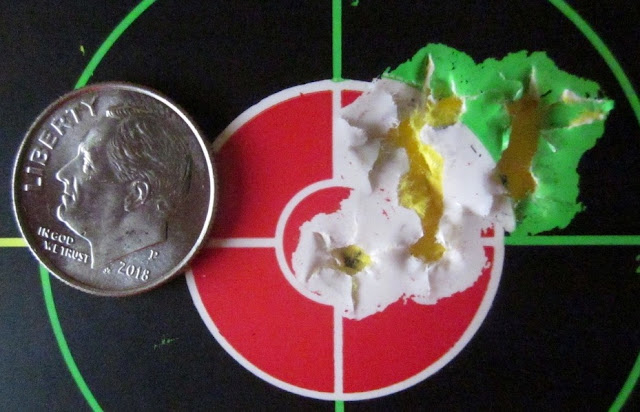 I also recently finished a build of a new pistol (thanks to SAPOutfitters for a stripped receiver) using a PMACA chassis and KAK Shockwave brace: 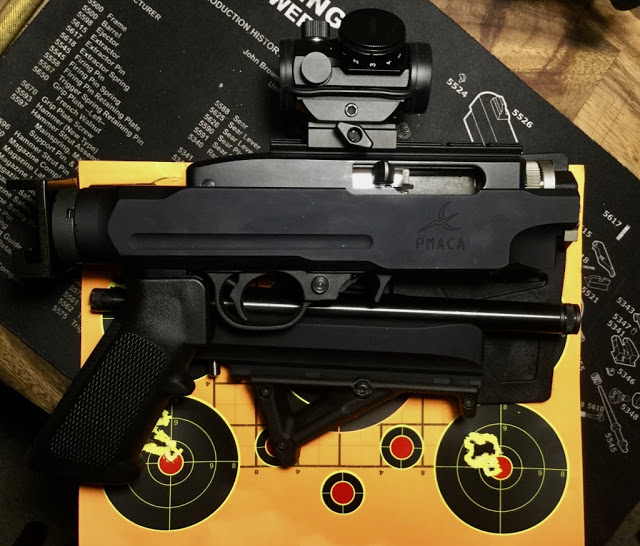 Even better, I just got in a new item for my PMACA Charger. How do you make a pig whistle? Use a Whistlepig barrel: 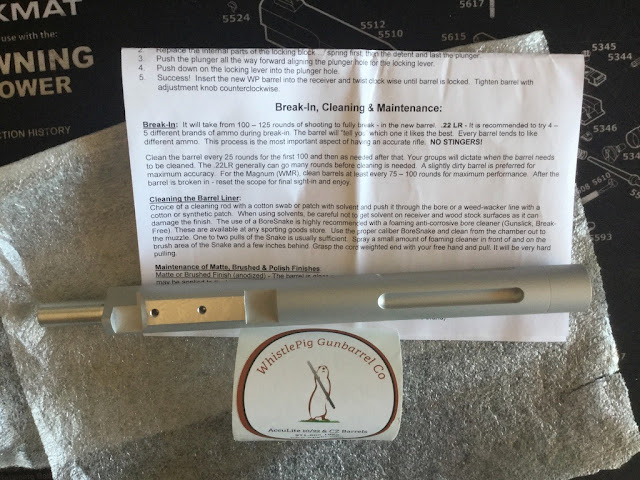 Well, not really a WhistlePig barrel, more properly deemed an Acculite barrel. This is a 10" fluted  and threaded barrel. It is aluminum with a steel sleeve and weighs about 10 oz. According to the company, some break-in is required, with cleaning every 25 rounds for the first 100 rounds, so I made sure to take some CLP and bore patches with me to the range. One nice thing about 10/22 Takedowns is the ease of cleaning. Much easier than breaking down an automatic pistol or revolver!

The Acculite barrel does not come with a Takedown locking mechanism (usually available for $50 or so as parts), so the first job was to remove the old mechanism on the factory blued barrel, You must depress the locking plunger, then at the same time pull the plunger pin - being careful not to let the plunger fly out, as it is under pressure. You can then access the 9/64ths hex button-head short bolts holding the mechanism to the barrel. Reassembly is the reverse, and I made sure to put blue Loctite (242) on the short bolts: 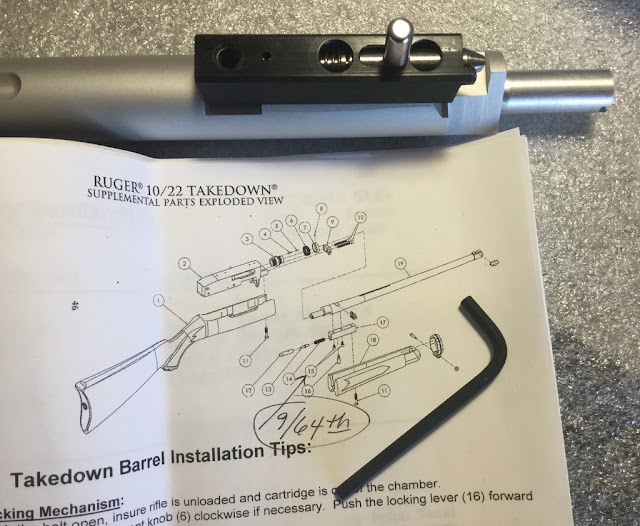 I probably wouldn't over-torque the bolts, as you may strip the aluminum threads (I wonder how many folks do that with these barrels?). The result is a nice looking package: 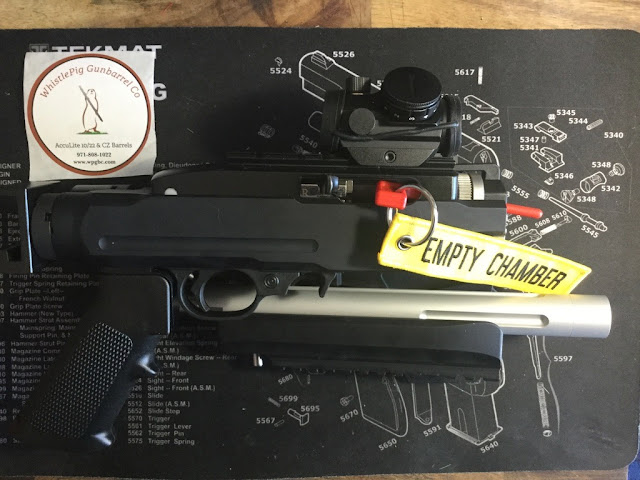 Note however: The Acculite barrel will not fit the standard Ruger Charger Takedown poly stock.

The barrel will not fit the Ruger Charger Takedown poly stock.

Fortunately, the PMACA chassis supports standard factory taper and bull barrels with no problem. The results are pretty good, IMHO. I used Aguila Super Extra SV and CCI SV LRN rounds to break in the barrel: 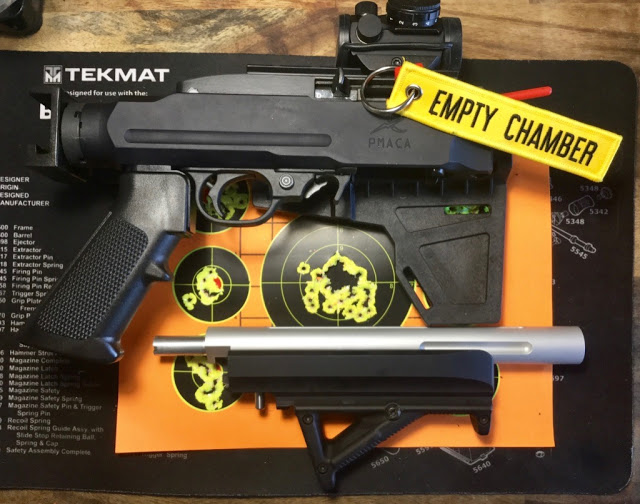 I look forward to lots of fun range time with my 'new' Charger Takedown pig whistler!

It took a few purchases and range sessions, but I now have absolute cowitness on the Charger TD. The elements are: 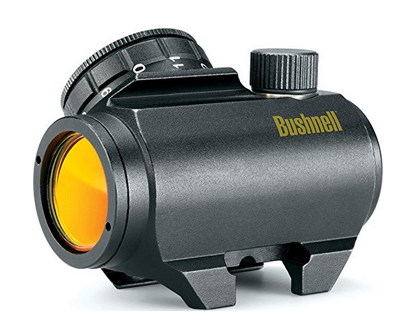 UTG Sub-compact rear sight (which has its peep hole drilled out a bit larger, using a bit chucked in a modified exacto blade pen handle): 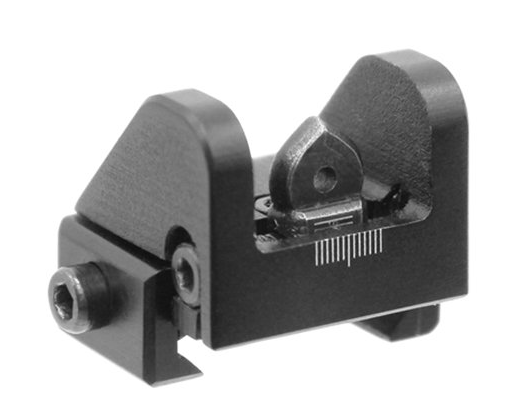 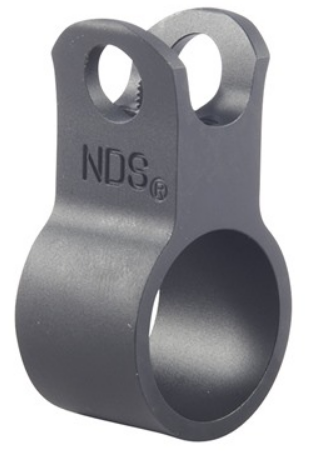 and of course, the Whistlepig Acculite 10" barrel. I had to do a bit of sanding to slide the NDS front sight onto the Acculite's threaded crown protector, which is tightened down on a Viton o-ring. The UTG sight was raised to its uppermost elevation. The NDS sight post was brought down a few turns. The pistol was first sighted in using the TRS 25 red dot. Then, the red dot was removed and the pistol was sighted in starting at 30 feet. Amazingly, elevation was perfect, but windage was off to the left. So after a few turns on the rear sight (the UTG has elevation and windage adjustment!), the target was sent out to 25 yards, then tested again.

After confirming the iron sights, the red dot was re-attached and several round-robins were done on the target with the red dot nestled just below the tip of the front iron sight: 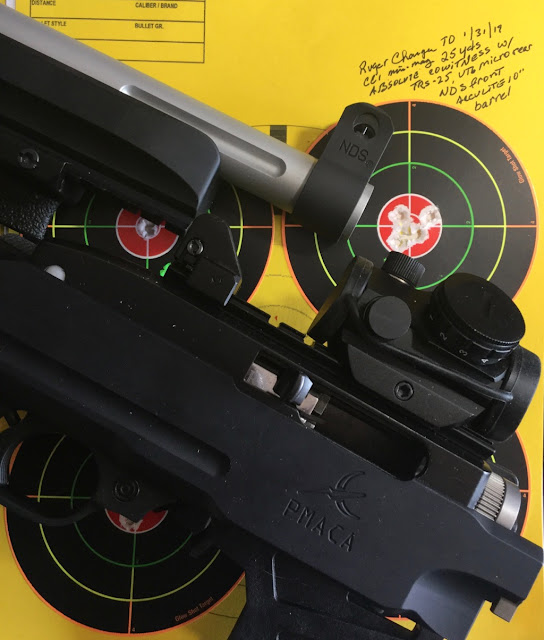 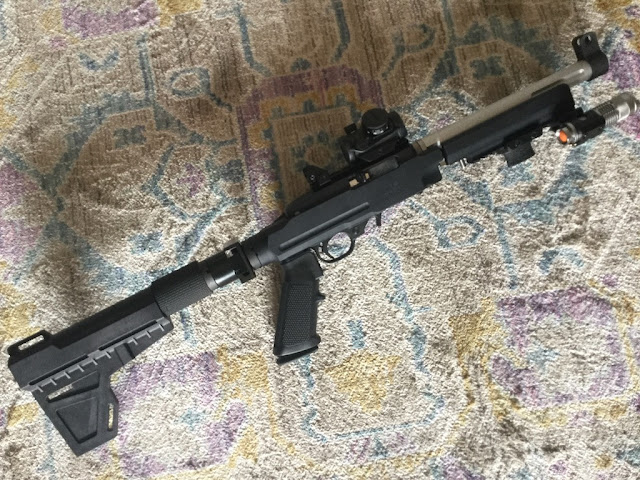 This is what the pistol looks like with the brace folded. Note that the left-hand fold allows use of the pistols charging handle and access to the safety and magazine release: 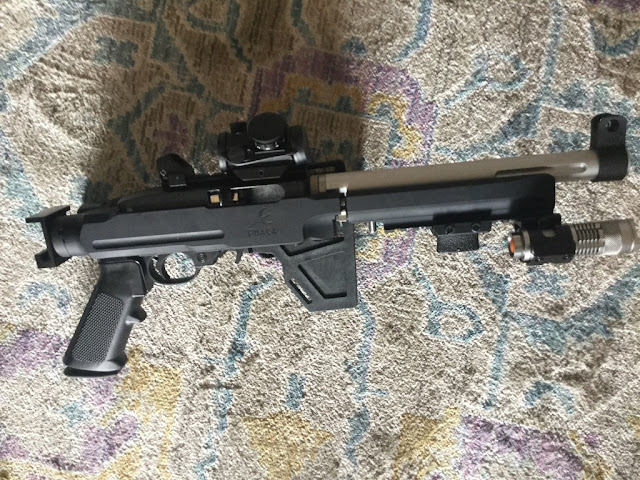 And for a nice compact storage in a range bag, the pistol - being a Takedown model - packs away nicely: 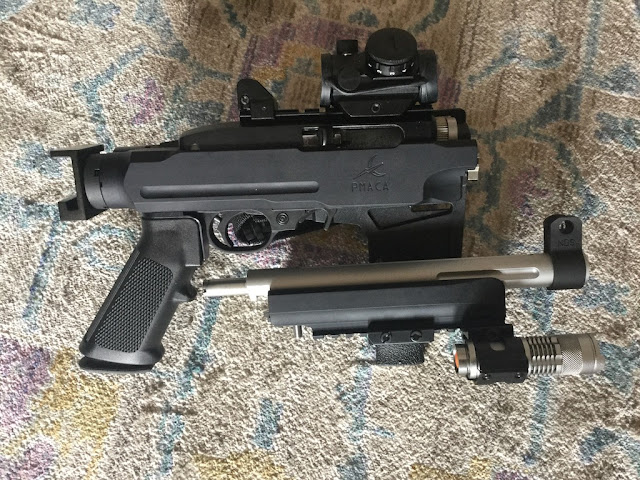 Note that i also put on a Missouri Tactical Products LLC A2 Pistol Grip Plug for AR/M4 - AR-15 Stowaway Pistol Grip Plug (~$8) on the end of the grip to hold a spare 2032, hex keys, etc.), along with a LED flashlight and a Blackhawk rail mounted thumb rest.

Some folks think that a third-party bolt buffer can make the 10/22 a tad quieter to shoot instead of the 'clack-clack' of the factory steel buffer. But there was no way I was going to pay $10 or so to get one when I could just get a foot-long stick of Delrin 150 and make my own - you can find 'em on the 'zon for less than $7 at the time of this writing, which is enough to make at least nine 1.25-inch by 1/4 buffers. I cut them with a Dremel, then slightly chamfer the edges.

The mechanical properties are enough to support use as a buffer:

Finally acquired the Charger that I originally wanted. Looks like TALO pushed out some more stainless versions with the varigated green stocks. Honestly, I'm not really thrilled with the stock, but will probably keep it. My biggest beef is that it isn't milled out to accept a Copper Custom adapter. I contacted Copper Custom and they said they would mill it out and include an adapter for $150. No thanks.

But I am quite pleased with the accuracy out of the box. Here are the first 15 rounds via the included Ruger 15-round magazine (after sighting in at 25 yards; btw, a laser bore sight can save a little time and effort): 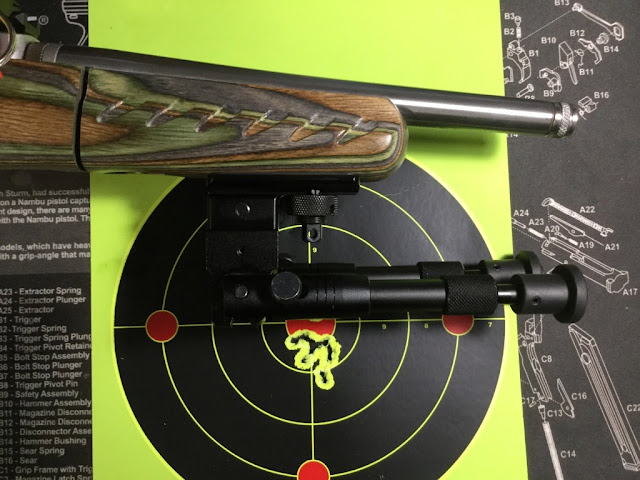 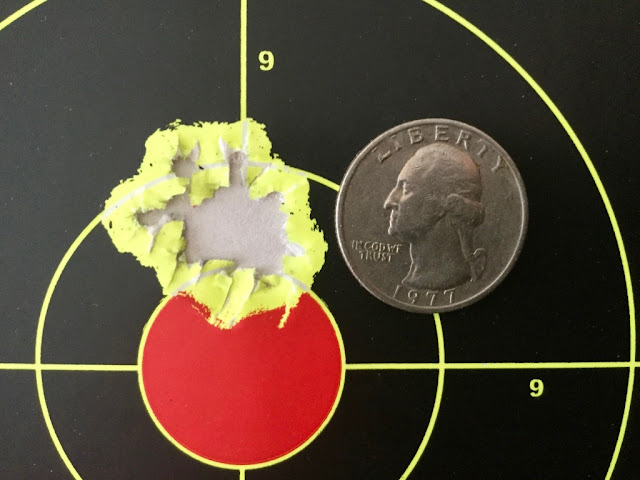