Plinking on the Cheap

Brought home a new compact plinker the other day. It's stainless and plastic and comes with a nice carry bag and a 25-round magazine. This is what it initially looked like after adding a Simmons 3-9x variable scope with Weaver 1" Quad-lock rings:

This page documents my experience with my new Ruger 10/22 Takedown (Model 11125, a 'Davidsons' special). Out of the box the front sight was not tightened down in its dovetail, the barrel nut was not adjusted, and the takedown hex bolt was not tightened - always, always check out, clean and adjust your new weapons before heading out to the range!

One of the most important things to do for the Takedown is to properly adjust the barrel tension to the receiver. To see how to do this, browse to:

Starting at the 2:06 mark in the video, you'll see Ruger's official method. You can also check the 10/22's manual:


Interested in taking off your flash suppressor-equipped 10/22? Don't follow Ruger's advice. I'm out of pocket almost $10 after reading this:

It's not true. It won't work. And Ruger's guilty 'cause you can't acquit if the bit won't fit!

I emailed Ruger customer service about this FAQ and got a response in less than 24 hours:

The answer is that is, apparently, this particular model Ruger (11125) has a flash suppressor that does NOT take a T-60 Torx, but instead requires a 3/4" wrench on the flats for removal. So save yourself some money, folks. I initially figured the Torx would be less problematic, but apparently I now must use a wrench.


Here are some initial results of my new 10/22 Takedown's first run, using nearly 300 rounds of a variety of rimfire on hand to test rifle and magazine function. I used a brand-new 10-round (clear) magazine, a brand-new 25-round BX-25 magazine included with the rifle, and a used dual BX-25 magazine purchased at a LGS. The 10/22 was cleaned before heading out. I didn't mess with the magazines at all: 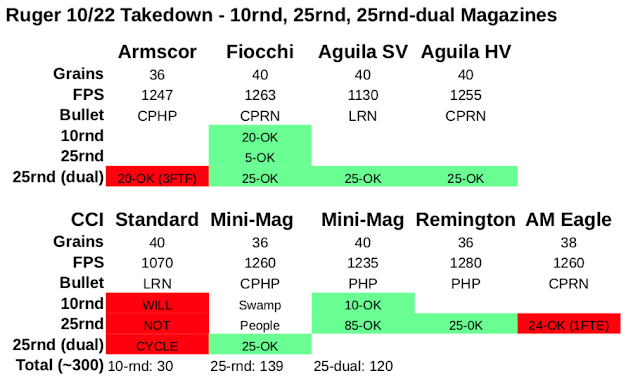 Based on my limited experience, I at first could not use CCI SV (at first the ammo was unable to cycle the bolt; this changed after a 400-round break-in). I don't recommend Armscor for the 10/22. The Armscor had a number of failure to feeds (cartridge incompatibility or deviation? It's cheap stuff).

Federal's American Eagle rimfire was inconsistent with a failure to eject. Two surprises were the acceptable performance of the least expensive rimfires: Aguila SV, currently about $0.05 per round, and Remington Golden Bullets, purchased locally from Wally World at about $0.045 per round.

All four magazines functioned perfectly. I knew better than to try using the extended magazines as a support grip, although it would have been wonderful had Ruger designed the receiver, catch, and magazines to do that.

1. The rotary magazine is the best, most foolproof mag for the rifle. The problem is that it is not extended, and only comes in 1-, 5-, and 10-round variants, clear and black.

2. Don't bother with any extended magazine except for Ruger's BX-25, the rest are crap. Well, I can't say, as I don't have any third-party mags, but I've read plenty of stories about problems.

4. The problem with misfeeds is the feedlips.

5. The problem with misfeeds is in the interior channels for the follower and rounds.

6. The problem with misfeeds is a loose follower. One purported fix incorporates a .22 short round to help ammo feeding:

7. The problem with misfeeds is a weak stock magazine latch, fixed by using a stronger spring, included with a product such as the KIDD Magazine Latch Plunger, in Stainless Steel and the 2nd spring option, which is interchangeable with the installed standard spring. Other springs in a similar diameter and length but stronger compression are available at Ace Hardware - I found a couple locally for $0.60 each.

9. Tape the offending mag to a target board and shoot the piss out of it (using one or more rotary magazines)

Use Logic to Troubleshoot 10/22 Problems!


If your 10/22 is not running properly, use logic to solve any problems, such as accuracy and feeding issues.

1. don't change parts willy nilly... stick with stock parts and then only replace one part at a time
2. the majority of feeding issues are due to magazines
3. don't use the BX-25 or any extended magazine as a rifle support or as a hand grip
4. if the rifle functions perfect with a 10-round rotary mag and some, but not all BX-25 mags, then it is the particular magazine
5. ejection failures can be due to dirty ejector/bolt; a cheap fix is a new ejector
6. stove pipes can be due to ammo type, dirty actions or a flawed ejector
7. failure to fire can be due to dirty action, dirty bolt or firing pin
8. label your multiple magazines and track performance to find functioning ones vs problematic ones; only then start playing around with the problematic magazine
9. rotary mags are more dependable and forgiving than extended magazines
10. IMHO, 100- or 110-round drum mags are gimmicky, but hey, that's like my opinion, man.
11. as a last resort, call Ruger customer service; and if your 10/22 has to go back to the mothership, don't send your rifle back w/3rd-party parts.


I ordered a Magpul X22 Backpacker stock from Brownells. It came with three 10-round mags for $128 shipped, which I thought was reasonable. I also obtained a BX trigger for $49 from Brownells and installed it, along with a bolt slingshot-modified part. More to follow.


Snagged a deal from JWH for a scalloped bolt, captive firing pin and extractor assembly - also included was a nice charging handle. Alas, it has a captive spring; fortunately I have a Kidd charging handle w/three different springs on hand - will be testing to see if a lighter spring will let me run CCI 'quiet' rounds.


I'm pretty happy with my new 10/22 Takedown (Model: 11125). It came with a nice bag, different from the other models in that there are not outside pockets and large, red Ruger logo - only a simple velcro patch - quite classy and stealthy. Inside are moveable velcro 'cups' and straps to arrange how you'd like to arrange your gear, along with padded 'ears' folding over three large pockets.

I did find that the factory sights (which I can barely see at my age) shot a bit to the left (will have to drift the rear sight a tad). So I ordered a 'see thru' scope base and an inexpensive Simmons silver 4X scope to match my 10/22. Here's a target from a recent outing using Aguila Super Extra HV and the Simmons 3-9x scope: 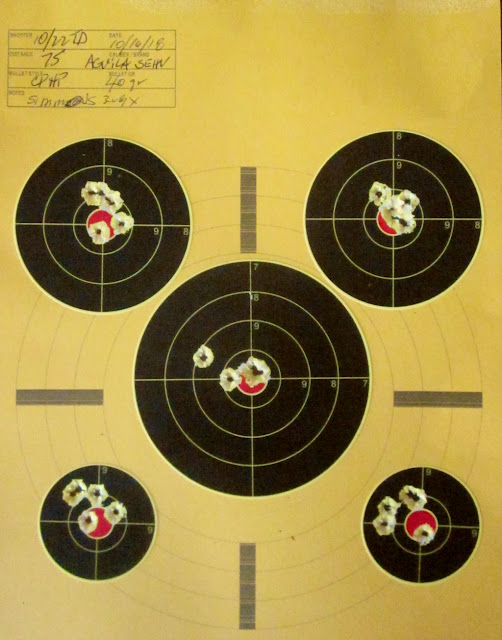 
I removed the scope when I swapped the Ruger TD stock for the Magpul X22. With fingers crossed, I re-attached the scope in the same position, then went to the range and ran the first 10 rounds using CCI standard velocity (1070fps, 40-grain LRN) through a clear rotary mag. I made sure to first cycle the bolt several times before loading the magazine.
After a couple deep breaths, here are the results: 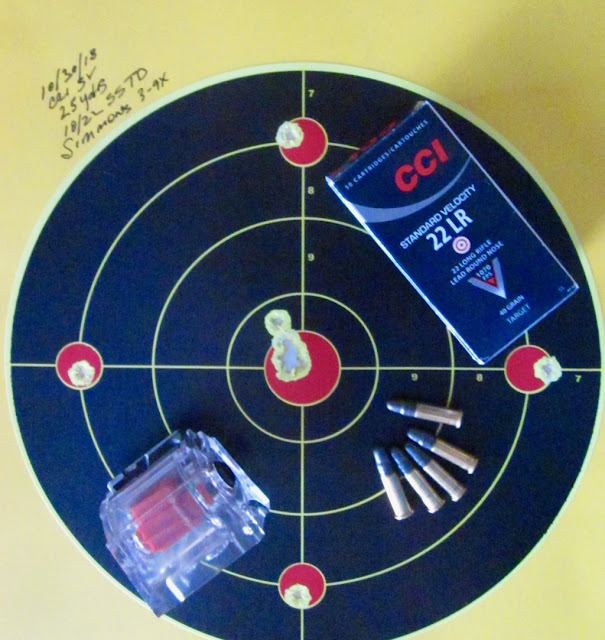 I look forward to getting better acquainted with this plinker. Today's outing was another fun test.

Hope this helps some folks out there contemplating this rifle. I'm sorry I waited so long!