This past month I've splurged on a couple new Charter Arms revolvers: a new and unique no-moon-clip Pitbull in .380ACP, a nice complement to my Sig Sauer We The People P238, and now a high-polish Mag Pug in .357 with a 3-inch barrel and adjustable rear sight for elevation and windage.

I like stainless revolvers, and a polished stainless revolver is especially appealing to me. I know some folks don't like the fingerprints, but i just wipe mine down. I don't worry about scratches or dings or dents - I think those things just add character. But it's nice to know that with a Charter you're not handling a shelf queen - these revolvers are meant to be used and used hard!

I took mine right out to the range after purchase, but first gave it a thorough check-out and cleaning. 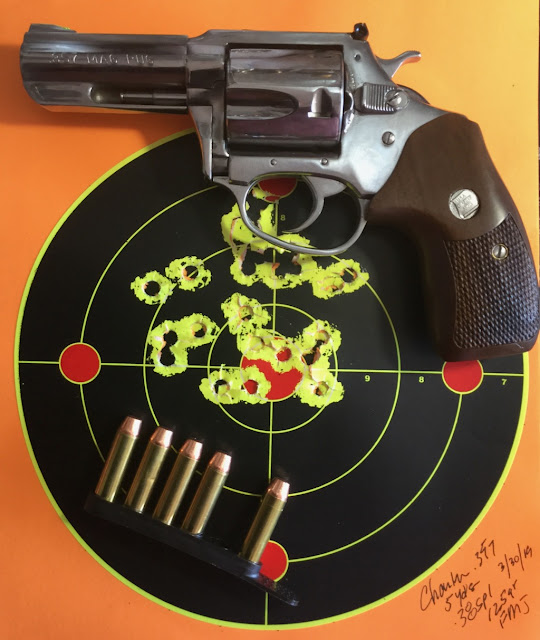 The revolver was shooting high, so I consulted the included manual regarding elevation adjustment: 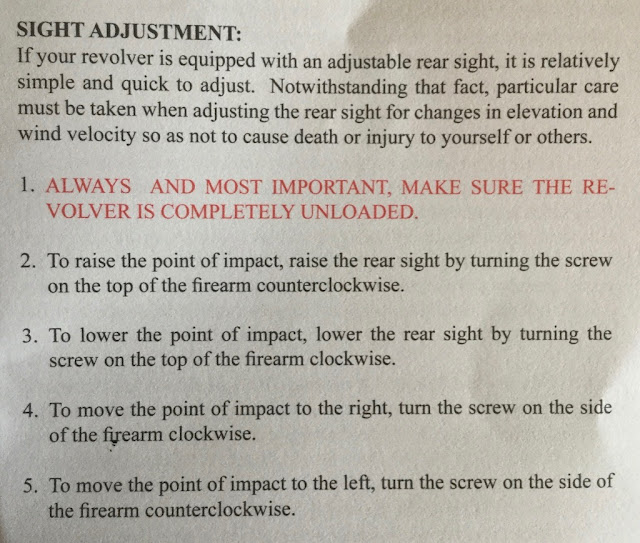 The top of the rear sight's blade has a large 'E' with an arrow pointing counterclockwise. Most other sights use the word 'UP,' but I guess this was done to save letter space? Anyhow, I'm going to assume the 'E' stands for 'E'levation. Anyhow I gave the screw a few turns that way and tried again, this time at 7 yards: 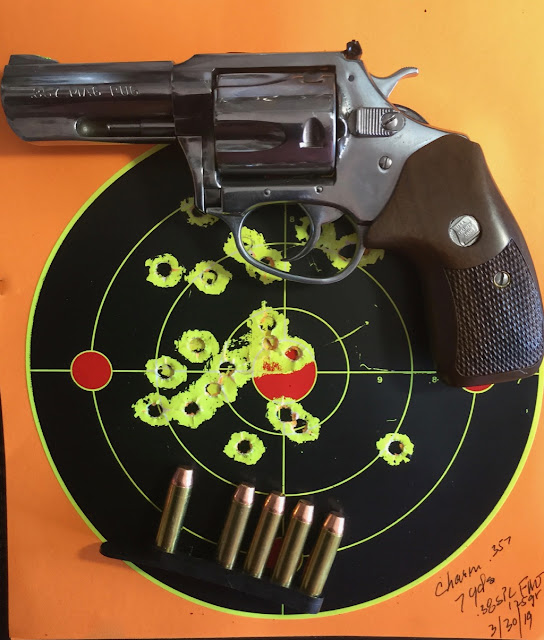 Since this was my first 50 rounds through the revolver, I think I'll need a couple more range sessions to get it dialed in. There is little recoil when using .38SPL.

On its second outing, I adjusted the elevation - unfortunately it's still shooting high even with the rear sight raised all the way, so my sight picture has the tip of front sight at the bottom of the rear sight - not a real problem, but maybe i'll buy some spare rear sights and modify a few to lower the picture. Anyhow, I'm still happy with the wheelgun after another range session: 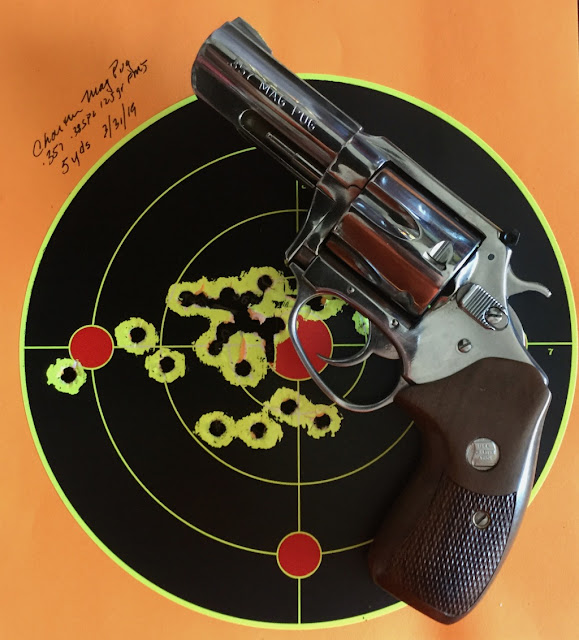 I'm pretty happy with my new Mag Pug and look forward to many more range sessions!


Note that the grip is unlike others I've seen on Charters. They are not the small wooden ones used on the smaller frame, nor the nice rubber ones used on most large-frame Charters (and AFAIK, there are only two frames sizes for Charter's revolvers: small and large). While these grips work OK for .38SPL, I'm not sure I'd want to use them when shooting .357mag - I'll give them a try anyway some time in the future.


I must add that when I got home and did a more thorough cleaning I found the inside of the gun absolutely filthy, and also found a number of nooks and crannies on the exterior that still contained polishing grit. It doesn't look like Charter does any ultrasonic cleaning of its revolvers before leaving the factory.

Some General Cautions about Charter Revolvers


I also found a splotch of red threadlock in the extractor rod channel. Threadlock is applied to the crane screw, cylinder latch release screw, cylinder latch screw, and hammer screw on these revolvers, and you would be wise to pay attention to at the the latch release and cylinder latch screws. If the former backs out or in too far, you won't be able to unlatch the cylinder, and if the latter backs out, you risk the loss of the entire cylinder latch assembly: plunger, spring, washer, cover washer, latch and screw - which happened to me after I had a Pitbull 9mm come back from the factory - but a quick email to Charter and I got the replacement parts free of charge in the mail.

I'm much wiser about these issues now, and trust these revolvers implicitly when they are properly serviced - by me, of course.


Unlike other gun manufacturers, Charter Arms has been kind enough to release three videos on its revolver maintenance. These three videos cover just about everything you need to know to keep your revolver in tip-top shape:

You would be wise to download these videos and keep them on separate media. I find them infinitely helpful, and Charter is to be commended for producing and releasing them.
Posted by willie at 1:43 PM