I like stainless wheelguns, and have them from NAA, Charter, and in just the last month or so, Ruger. As luck would have it, right after I bought a Wiley Clapp version of the SP101, I found a plain-jane version locally for several hundred Simoleans less. So I subsequently blinged the pair out with a pair of grip inserts from Chig's Grips: 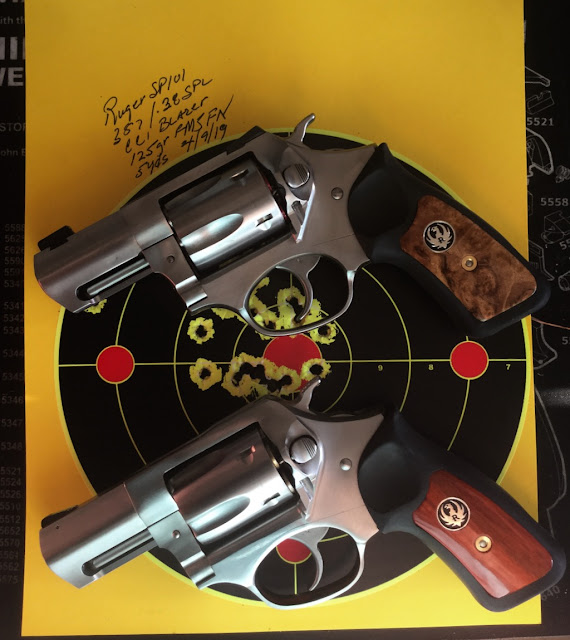 The Wiley Clapp SP101 has Novak sights (brass bead up front, drift rear). It shoots pretty good, with a now-smooth trigger after some polishing. Very tight to disassemble at first, but it's getting easier every time. I like that it shoots point of aim for me: 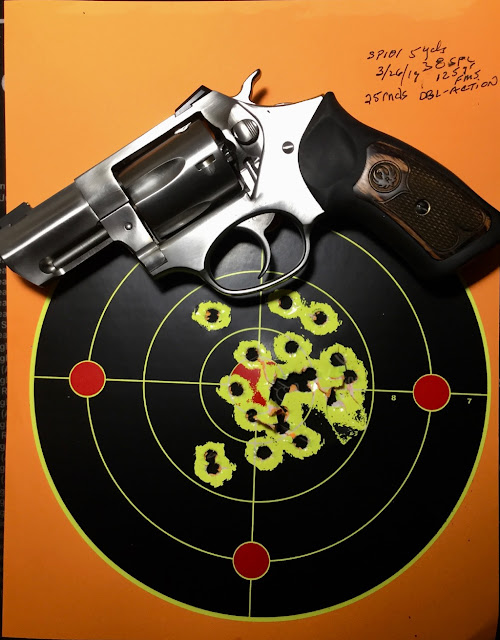 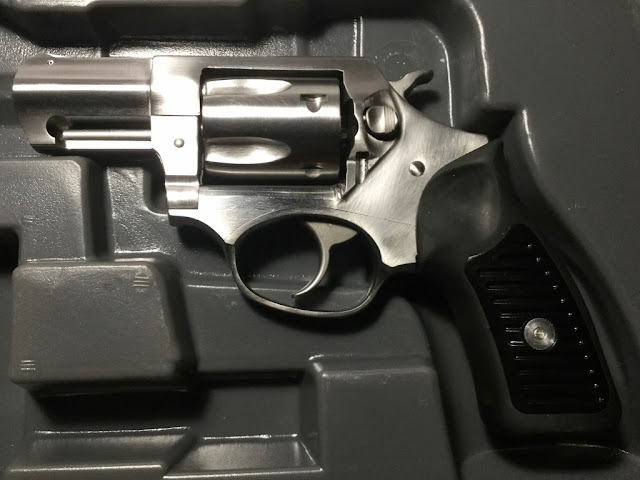 This is a sweet-shootin' little tank! Took it out for a spin this morning, and let loose with some 125gr FMJ .38SPL range chiclets in double-action: 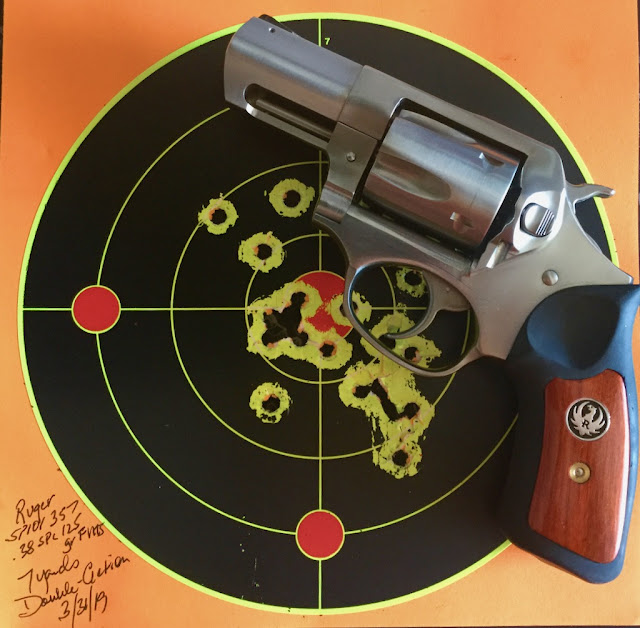 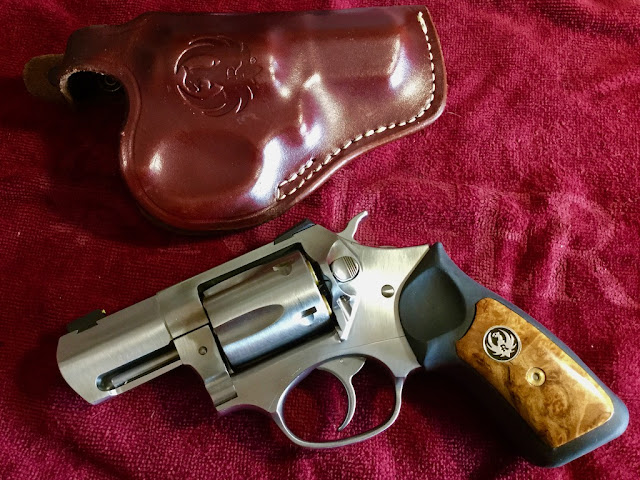 And just the other day I found this one, but in 4" which comes with adj rear sight and optic front sight. Here's a target from its first run of 125gr JHP: 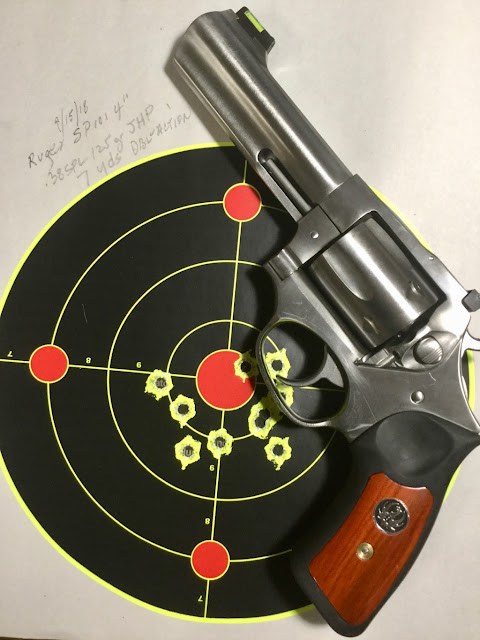 
I recently purchased several boxes of PPU 158gr semi-wadcutter for use for range practice. From the very first round it seemed like I was shooting black powder: large billows of smoke, terrible accuracy, and keyholing. But that wasn't the worst part.

When I got home and went to the bench to clean my revolvers, I discovered large swaths of lead deposits in the bores of both wheelguns. It took me three hours of soaking in Ed's Red, bronze brushing, brushing with and old bore brush wrapped with strands of copper from a Chore Boy pad, and multiple swab sessions with some Birchwood Casey lead remover to get the lead out of the barrels - and all this after only 25 rounds through each gun!

The next day I ran 100 rounds of the ammo through an old S&W snubby with a bobbed hammer that I inherited. Here is a pic of just a few of the pieces I was able to dislodge after soaking the 2" bore for several hours with a shotgun patch soaked with Ed's Red: 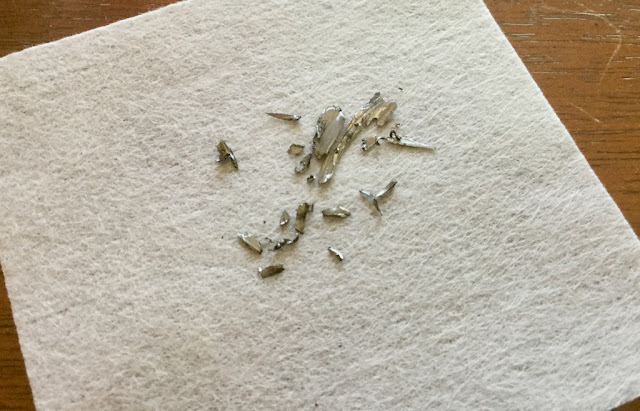 
I also tried a single round of some new ammo that AFAIK just hit the market: CCI's Big 4 Shotshell. I bought a box in .38SPL/.357 Magnum and a box in 9 mm. Looks like this stuff would work pretty well for larger rodentia or the squamata order of reptiles. Here's a shot from 9 feet of a single round: 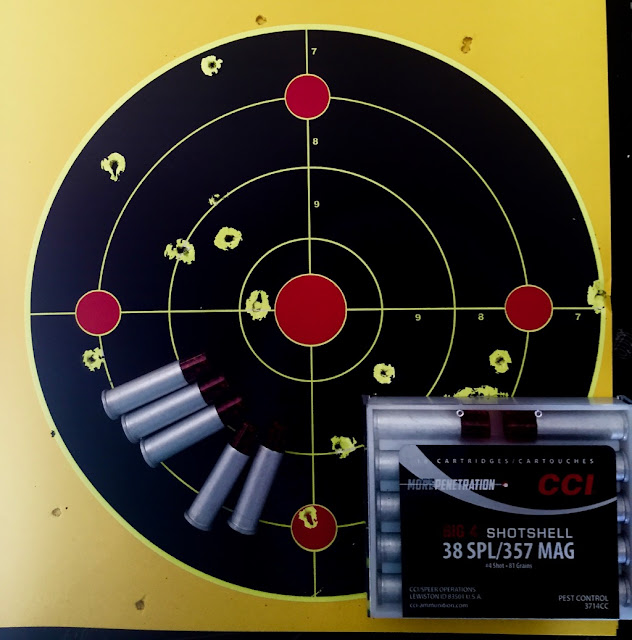