UPDATE (August 2019): Volquartsen has announced that it is discontinuing the Firefly and is currently putting the remaining new stock on sale (this review is of a blemish-sale model [which had no blemish])

I like my Ruger 10/22 Takedowns. I have a stainless Takedown rifle and two Chargers, one with a stock barrel and the other with a stock-length Whistle Pig Acculite aluminum-sleeved barrel. The rfile and two pistols see a lot of rounds every year because they're so much fun to shoot.

This review is of one of my latest accessories: a Volquartsen Firefly Bolt, which enables you to cycle and shoot CCI Quiet (710fps) .22LR rounds through your 10/22.


I was able to purchase the bolt, which normally retails for more than US$200, at a substantial discount due to a blow-out clearance sale (and a big 'THANK YOU' to the folks at rimfirecentral for the heads up). The bolt arrived in new packaging with little to no apparent wear or use. The package included the bolt, its attached charging handle, a recoil guide rod, a recoil spring, and a buffer pin (I make my own out of Delrin 150 rod). I'm going to assume that you should use this buffer instead of the factory steel pin to avoid wear  to the lightweight bolt, which is aluminum with a small steel slide plate on the bottom. 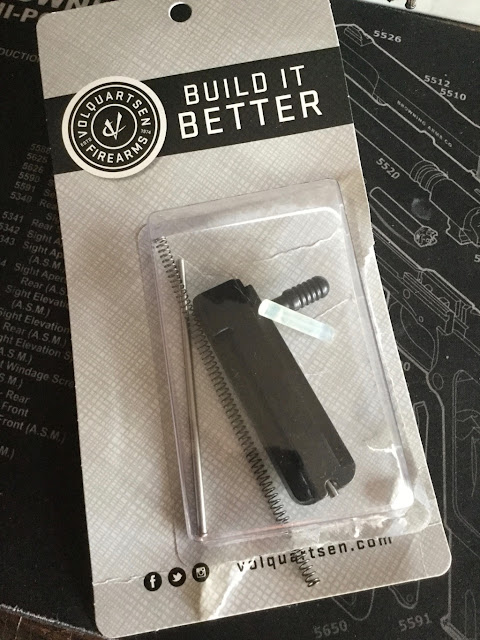 But what wasn't included in the package? This is where Volquartsen missed the mark:

There are no included, nor published installation instructions for the Firefly bolt!


WTF? Do a little research on the web and you'll see post after post of queries regarding this issue.

The Firefly Bolt is an interesting 10/22 accessory. As you can see it has the charging handle built in: 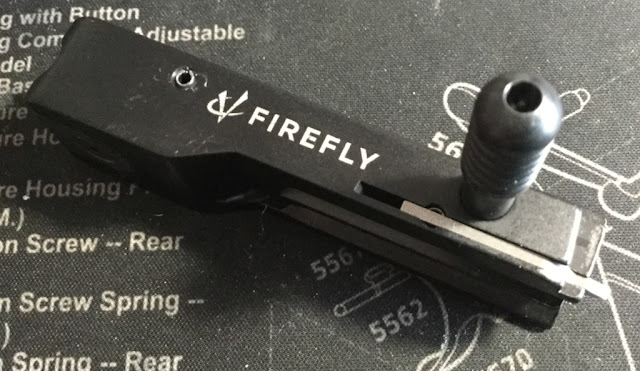 The underside has the 'normal' bolt channels, but also a metal (steel i'm going to assume) plate screwed and machined flush into the bottom of the bolt: 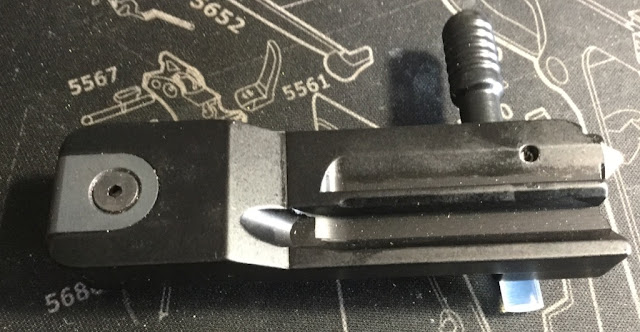 The rear of the bolt shows the rounded edge where the hammer resets and also the round end of the firing pin, which is captive and has little to no chance to wander during operation: 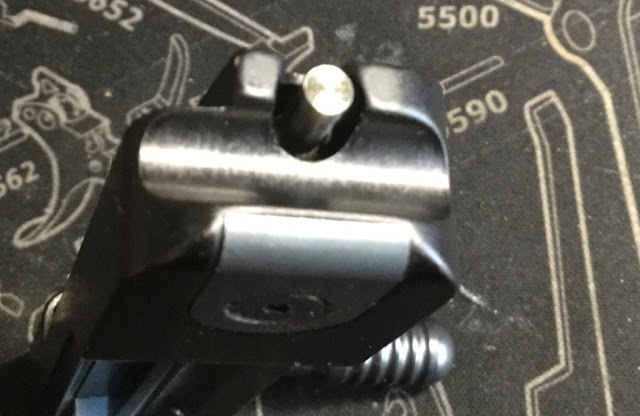 The forward end of the recoil spring guide rod slide into a channel hole on the side of the bolt. Also note the round business end of the firing pin: 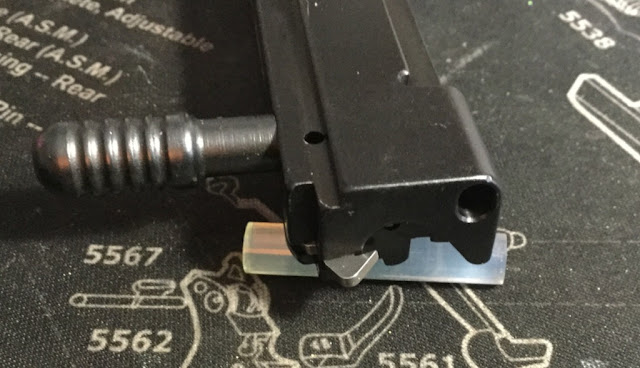 When installed, the rod and spring look like this:


So here's how I installed the Firefly in four steps. There were no instructions, so I just went with my own guesswork. It's a pretty simple process, actually.


Remove the charging handle, which is built into the bolt, by unscrewing it counter-clockwise. Since Volquartsen didn't include a clue about how to do this, I initially clamped the handle in a small bench vise, first protecting it with a fold of leather: 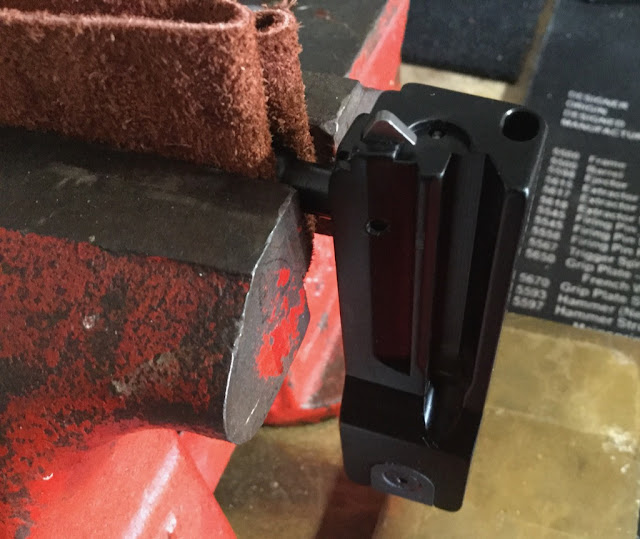 Then twisted the bolt as a lever and it unscrewed right away: 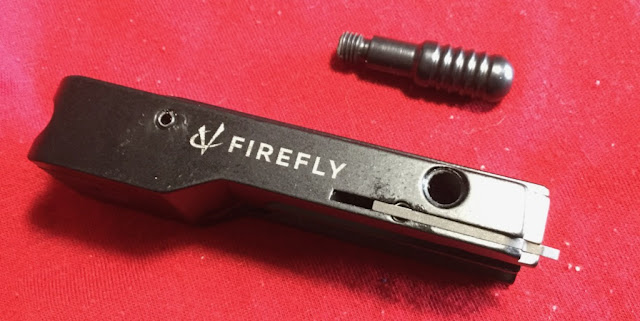 However, the more convenient and proper way (thanks to 'Dr Heckel' on rimfirecentral) is to use a 1/8" Allen hex key: 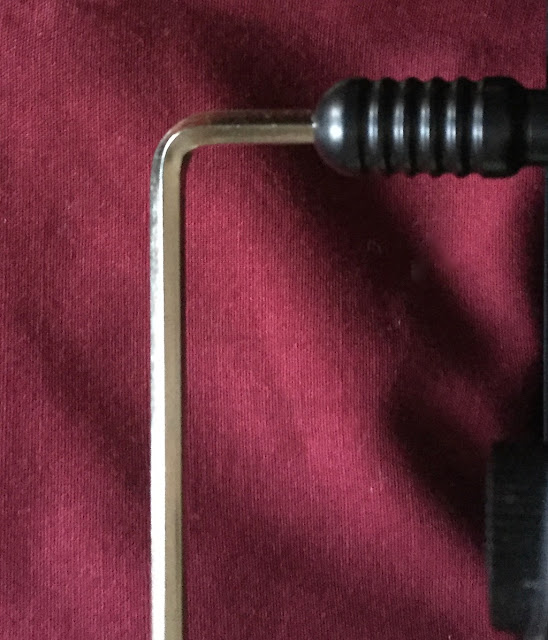 This will avoid any damage, and makes tightening the handle a lot easier after bolt installation. 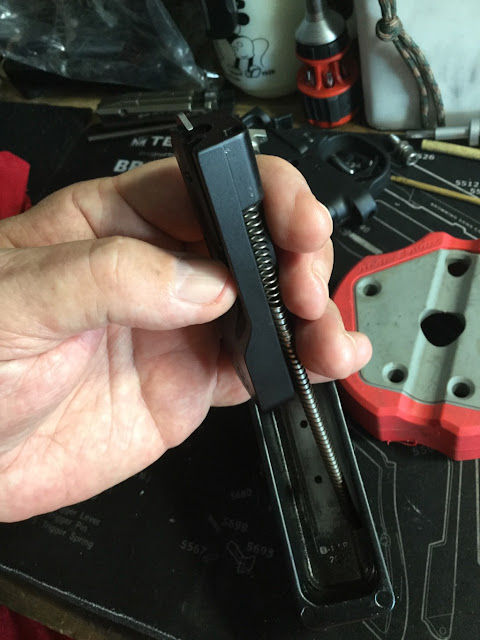 Don't be surprised if the bolt seems 'sticky.' It's new:

If the bolt sticks, simply nudge it forward - don't force!


Then re-attach the charging handle. I may suggest using a bit of medium threadlock to avoid loosening during use: 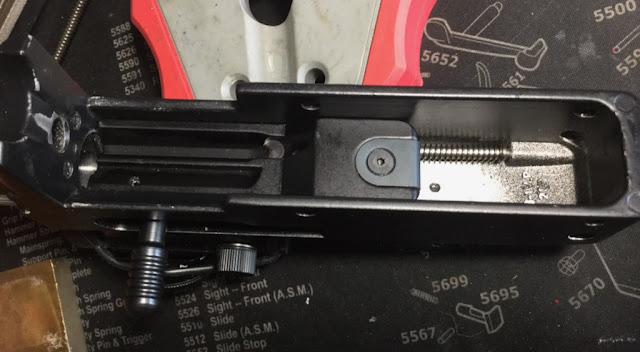 The 'stickiness' of the bolt meant there was some friction somewhere along the receiver channel. I'm wondering if the design of the non-captive guide rod and spring, along with the rod hole means there may be some break in? Anyway, after install and a few dozen back-and-forth slides, there was evident wear alongside the charging handle side. Compare to the previous out-of-the-box pic: 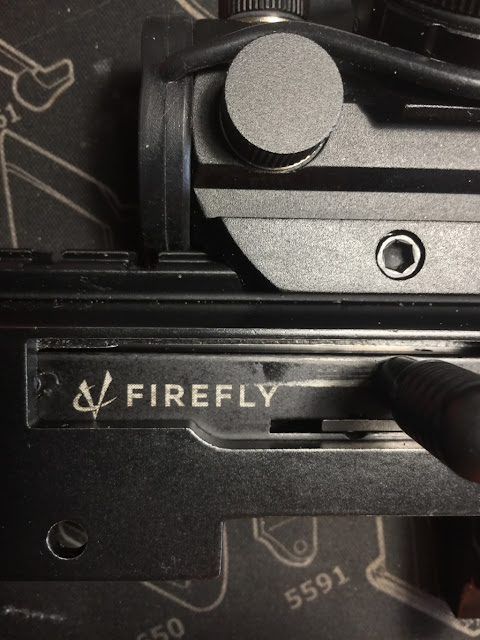 My solution will be to shoot the piss out of this new bolt. I'm guessing at least a couple hundred rounds may work. But in the interim, I used a little gun oil on the wear spot and sides of the receiver channel.

The final piece is the buffer. Here is a pic of the Volquartsen buffer. However, it was too soft and too large and would not install properly, so I reverted back to my Delrin rod. (One suggestion by 'DGF' on rimfirecentral is to use a fine emery board to knock off the edge on one end.)  At any rate, I would recommend a buffer other than the factory stock steel, as it could (just guessing) harm the aluminum bolt: 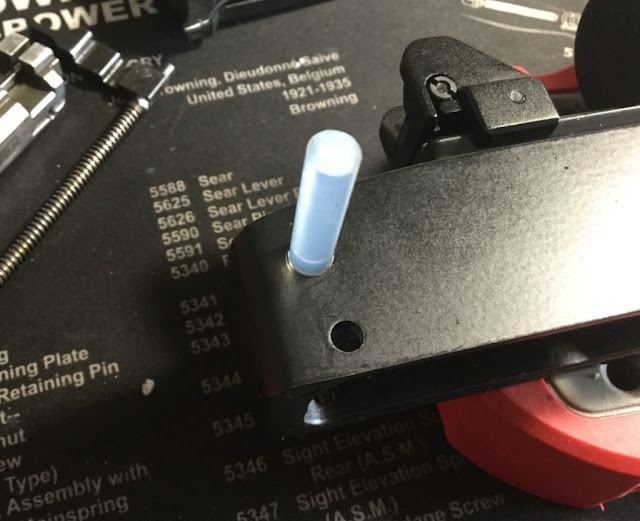 Frankly, I think installing this bolt is easier than installing a stock bolt. Dunno why Ruger didn't go with this approach. But as the old farts say, "The proof is in the pudding." So I'll update on how well the bolt works after a range session next week.

Range Report for the Firefly Bolt


Went to the range and ran 200 rounds of CCI's 'Quiet' 710fps .22LR LRN. Used a cheap red dot at 25 yards. The first 25 rounds seemed all over the place - i think the ammo is really just for plinking... but after more than 100 rounds the shots seemed to be settling in. Could also be due to a combination of barrel, bolt, and the dolt holding the pistol: 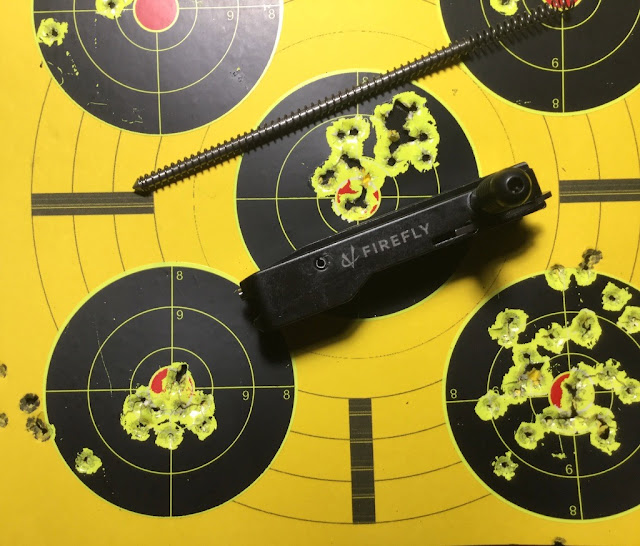 The off-groups above were me getting used to a new barrel slapped on the Charger. I also found that while the charging handle loosened a bit, I don't think you need to threadlock it, as unless you have a really long and extended range session, there is no way the handle can unscrew all the way - it's up to you, of course. And as you can see, I did remove the bolt for cleaning. However, there are a few tips and potential traps. 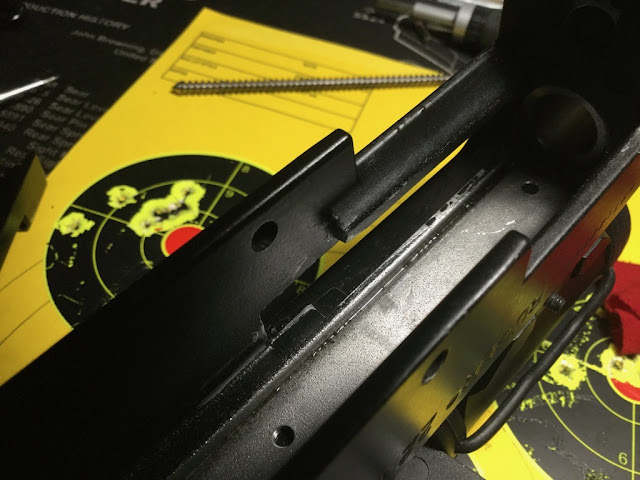 One tip: You can either lightly sand the notch *before* installing the bolt, or if you're having trouble removing the bolt, push it all the way back (you did remove the buffer, right?), then insert a thin dowel into one of the buffer holes and push up to slightly elevate the bolt. It should then come out.

When cleaning the Firefly, I did note at least one area that received a bit of wear - it was opposite the charging handle side of the bolt. I'll just keep shooting this bolt to break it in: 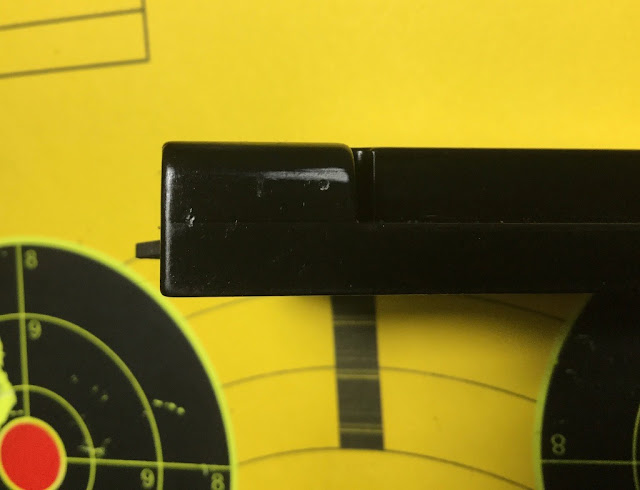 
Found an interesting modified Ruger BX-1 magazine on the evil Internet auction site. It has a roll pin angled through the feedlips/extractor, which allows you to load and cycle .22 shorts! This section details my experiences with a variety of .22 short loads. Please note that accuracy wasn't the focus here - it was function, and I deem this experiment a success! 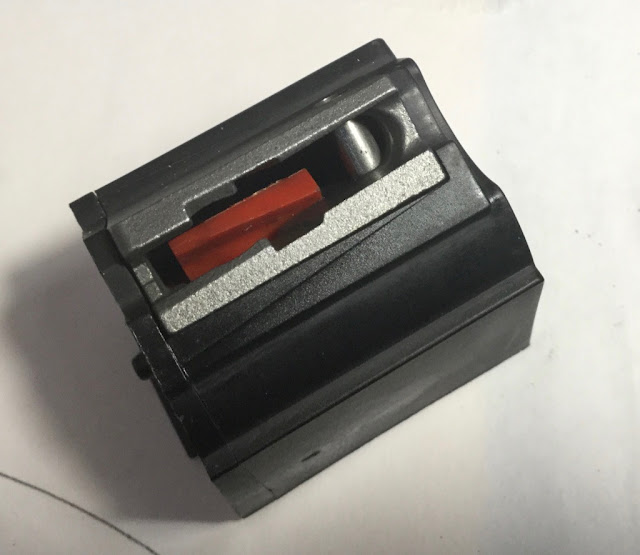 The pin is aligned just below the lips at a precise angle: 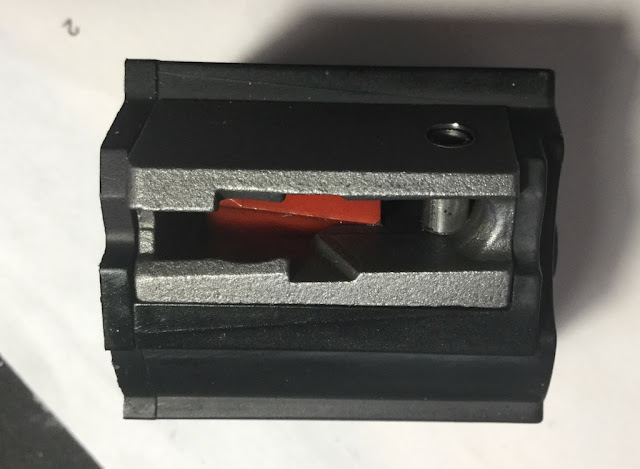 For a first test, I used one of my Charger pistols with a factory bolt because I also wanted to shoot some Aguila SV later on. Using CCI CBs, which have a spec of 710fps, I ran 20 short rounds through the magazine at the range with no failure to feed or extract - although I had to cycle the bolt manually. I was a little excited at first, so the rounds were kinda all over the place at 25 yards: 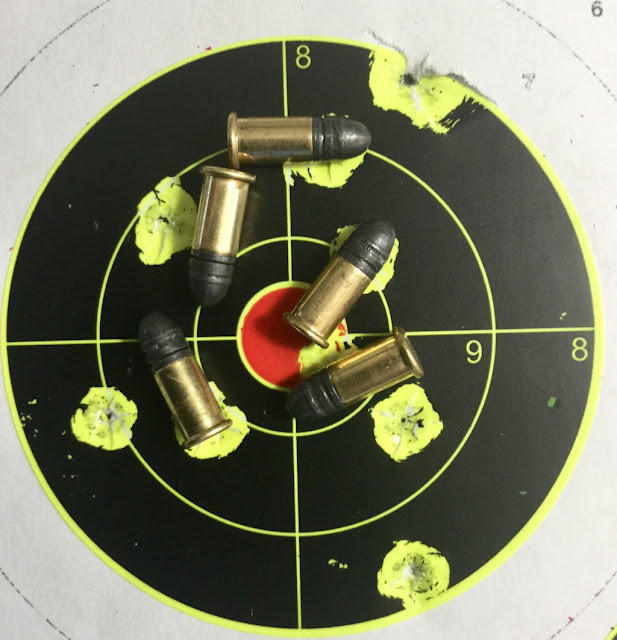 During the next range session, I installed the Firefly Bolt in my other Charger pistol, then ran the same CCI CBs. Only two out of 10 CBs would cycle with the Firefly bolt - bummer! But then I ran CCI CPRN shorts, which have a spec of 1,080 fps (purportedly outside the Firefly's comfort zone, but hardly by much). The standard velocity .22 short round-nose rounds worked perfectly. Success! 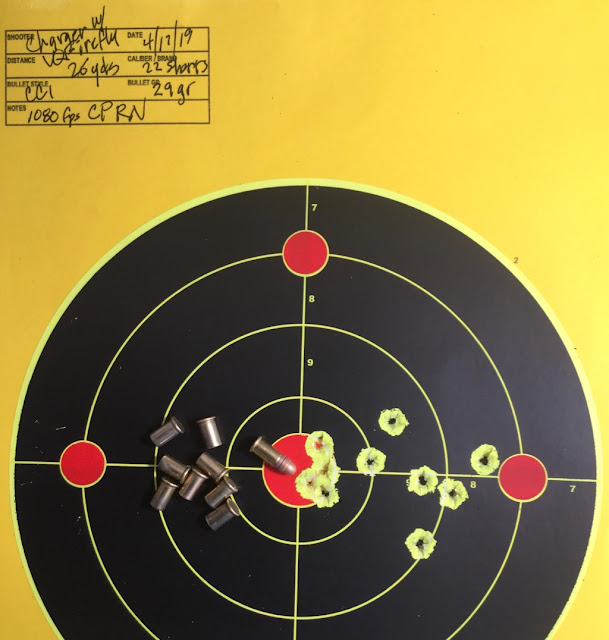 Finally, I ran some CCI CPHPs, which are deemed 'high velocity' at 1,105 fps. As expected, these ran well with no malfunctions. 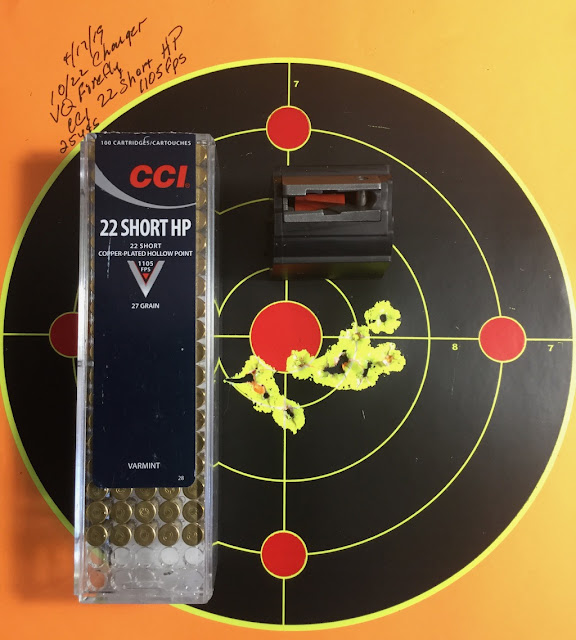 All in all, I like my Firefly bolt, and now that I know how to easily install and remove it, and how it functions with a variety of .22LR and .22 Shorts, this gives my shooting sessions a bit more flexibility and fun with my Charger! 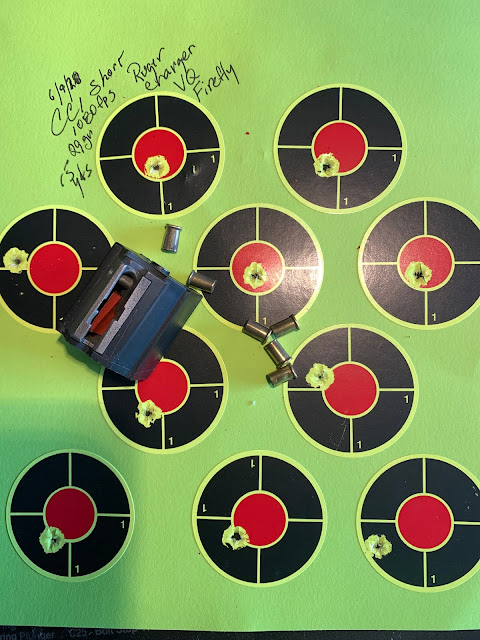 At the same outing, I also ran some CCI Quiet 710fps LRN. Pretty happy with the results: 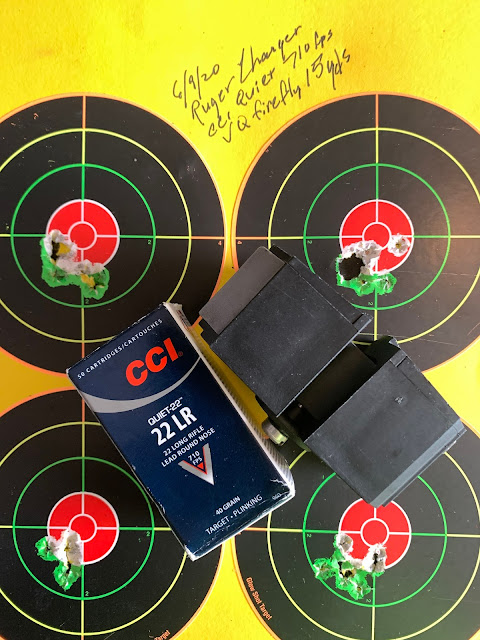