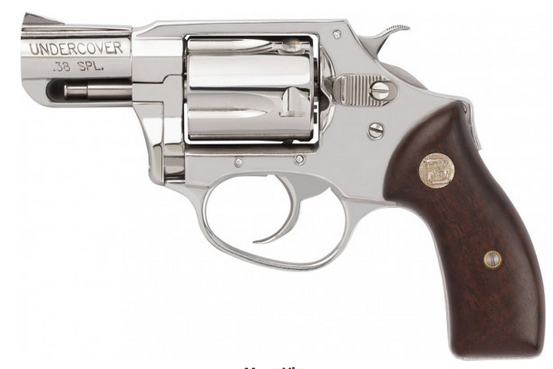 Tips, Tricks and Traps of the Charter Arms .38 Special in High Polish Stainless

This review is for a new addition to my pocket pistol stable - a Charter Arms Undercover .38 Special in a high-polish stainless steel. My other Charters are a Pathfinder in .22 magnum - that pistol is extremely accurate for a snubby and has run perfectly for more than 300 rounds so far; a Charter Pitbull 9mm, which after a trip back to the mothership runs great; and a nicely accurate Charter Pitbull .380ACP.

I have a number of other revolvers, such as an early Smith & Wesson Safety Hammerless from the early 1900s, a Smith & Wesson .38 Special snubby from the 1950s, a Ruger SP101 .22LR, two Ruger SP101 .357 magnums, another Charter Pitbull in .380ACP, and one of the later Smith & Wesson kit guns, the Model 317, version 3 - with the insipid internal lock which I removed and plugged up right away.

Charter offers multiple variants of the Undercover model in .38 Special, both standard weight and lightweight alloy. I really wanted a .327 model, but couldn't pull the trigger on a model named 'Undercoverette.' Charter currently lists the following Undercover models, all 5-round with the exception of the Police Undercover:

However, my Charter, in highly polished stainless is:

Note that most of the revolvers fall under four Franklins. This is a good deal. But what don't you get?

According to Charter, other features include:

1-pc barrel/lug/sight
8-groove button rifled barrel
Protected ejector rod
3-point cylinder lock-up (whatever that means)
Ergonomic trigger does not pinch finger (this is true; i *hated* the Ruger LCP)
Barrel is threaded into frame (not pinned?)
Full hammer block safety system (don't all revolvers have this nowadays?)
Quick lock time (whatever that means)
No side plate (yep, all innards slide into or up into the frame)
No cylinder stop to interfere with reloading or speed loaders (not really true, as you'll see)

A Closer Look at the High-Polish Undercover 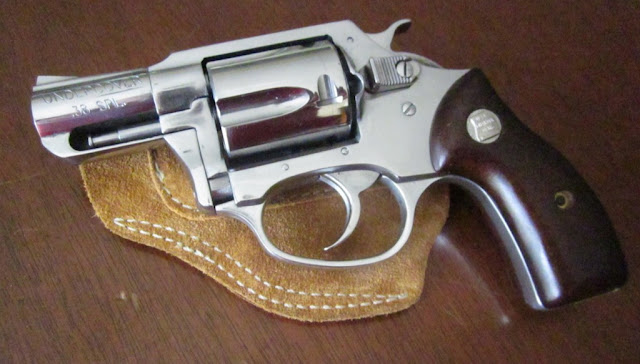 The revolver comes in Charter's standard plastic, foam-lined box with assorted papers and an insipid trigger lock to satisfy the lawyers. You'll get a set of standard 'old school' wood grips instead of the rubber grips for most of the Undercover models.

The polish covers all of the exposed parts of the revolver, such as the outward face of the crane, trigger, strap, slide latch, and screws: 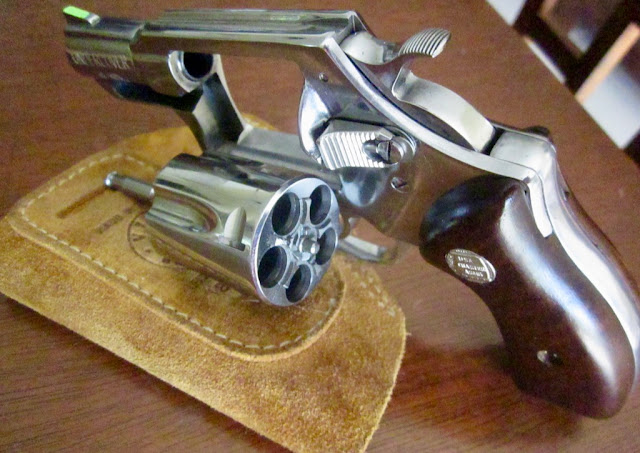 The polishing is most evident on the right side of the revolver, with its bare expanse of metal. But when you look closely, you'll see that although highly polished, the polishing did not remove all manufacturing marks. This is evident all over the revolver and quite frankly, I expected as much considering this revolver's price point - but it still looks great! 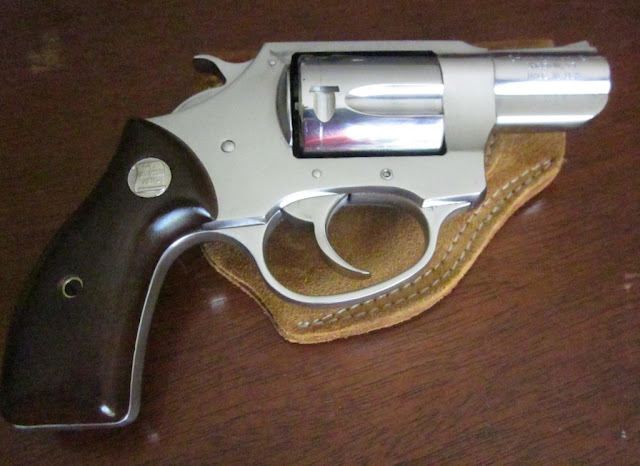 Of course, one of the first things I did was paint the front sight with a daub or two from my Wally World lime-green acrylic pen (you can get 'em in the fabric section): 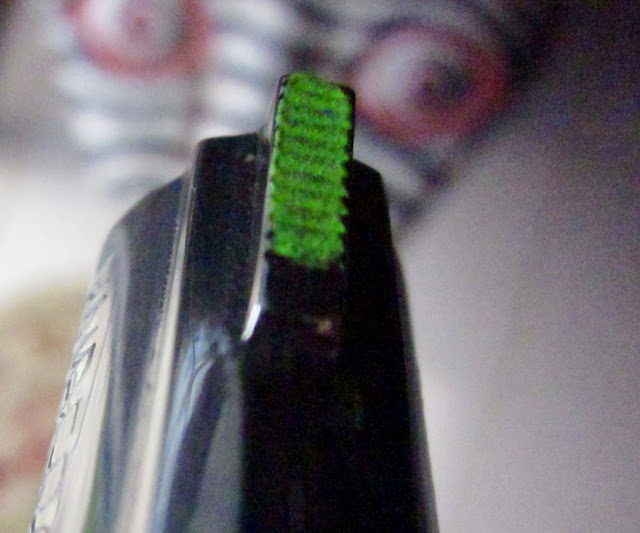 A few other details, such as the shrouded ejection rod: 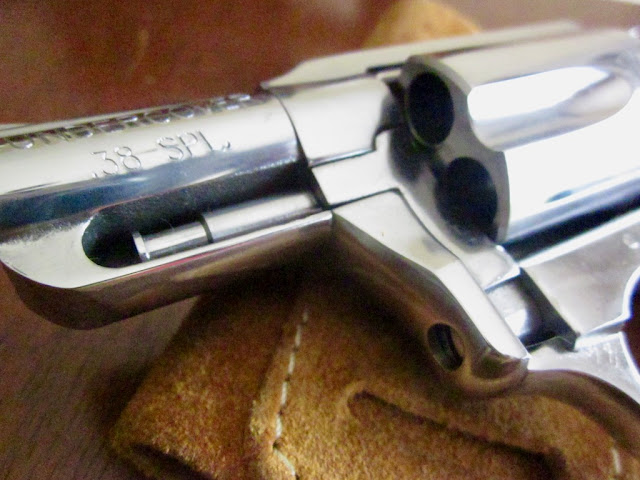 And the 2" barrel, where you can see the bit of metal not entirely polished. I didn't find it to be objectionable, and it's really not that noticeable: 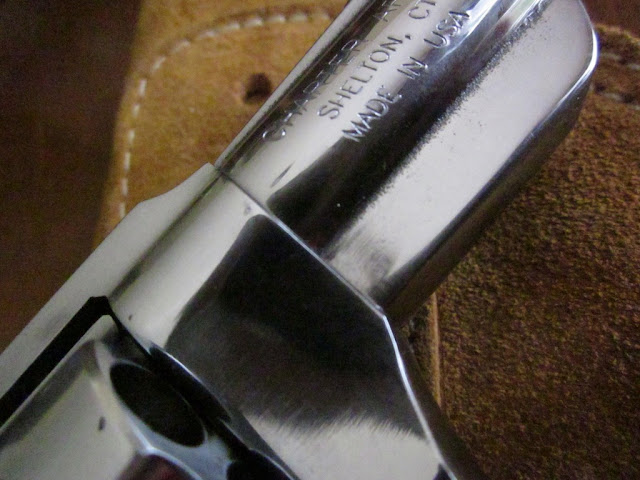 Finally, the trigger, which is much like the trigger of my .22 magnum Pathfinder, but with a nice polish. The frame, unlike the polymer frame of the Pathfinder, or the alloy frame of the other Undercover models, is of polished stainless steel - this is a bonus in my opinion: 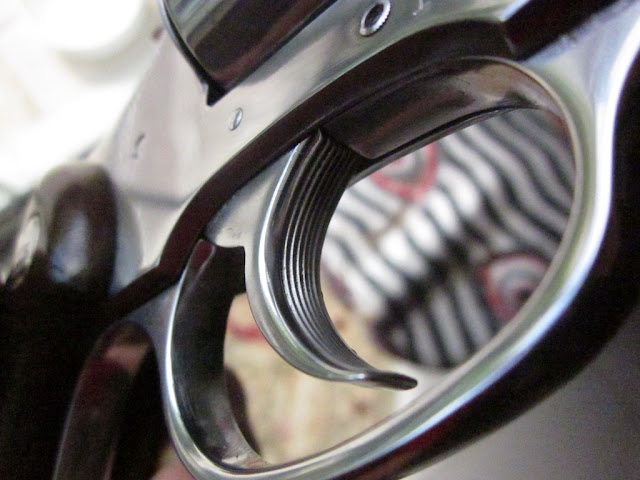 So the revolver looks good, but how does it shoot?

Took my new high-polish pocket revolver out to the range and ran a box of .38 Special FMJ FN. The first target was single-action at 12 feet. The initial cylinder determined that the revolver was shooting low, so this target was with the sight picture at the top of bullseye: 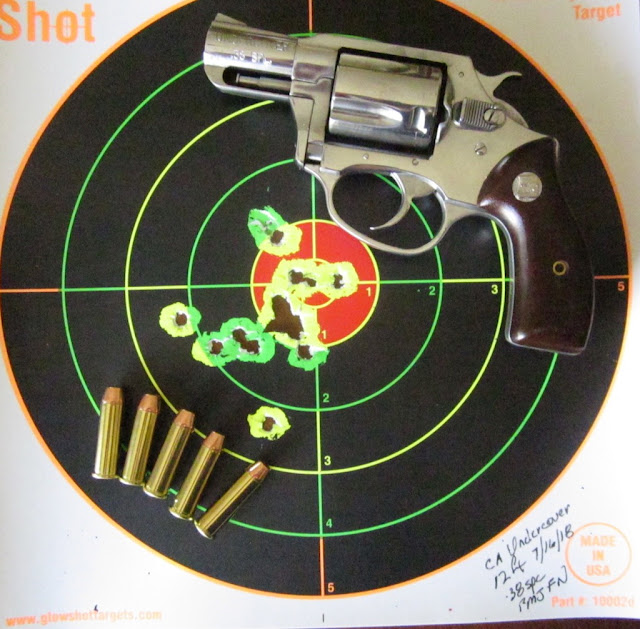 I think I'm pretty happy with the results. It is possible that the revolver may shoot higher with more powerful loads, but I like the ammo I'm using - reloads from a couple guys at Hyperion Munitions (support your local munitions makers!).

Next, I tried some double-action, but a yard closer: 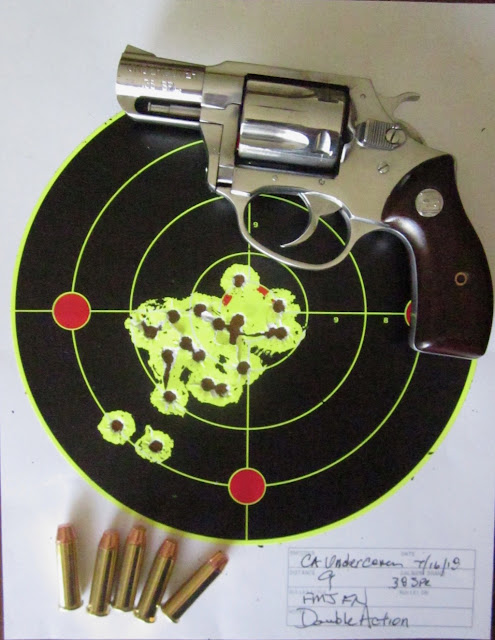 Not too hard to keep on the sight picture. I like the way this revolver handles, especially with the range ammo I'm using.

It's nice to have speed loaders, a loading block and storage for hitting the range. This keeps everything tidy on the range bench for me. Like the HKS speed loader modification I had to perform for the Pathfinder, I also had to modify the HKS-36A speedloader to work with the wood grips on the Undercover.

If you get a 5 Star J2 speed loader, which is milled aluminum, unlike the plastic HKS speed loader, you'll find it works 'out of the box' with no problem - albeit at a cost of 3X the HKS. For the loading block, a Makerspot 5-round square milled aluminum block provides a nice match for the J2 speedloader at a price of about 1/3rd the 5 Star versions (which have a large, prominent logo milled/lasered on the face, which I don't like). Everything fits, including a spare tray cut from a box of .38 Special factory ammo, neatly inside an $8 Outdoor Products weather-tight box from Wally World: 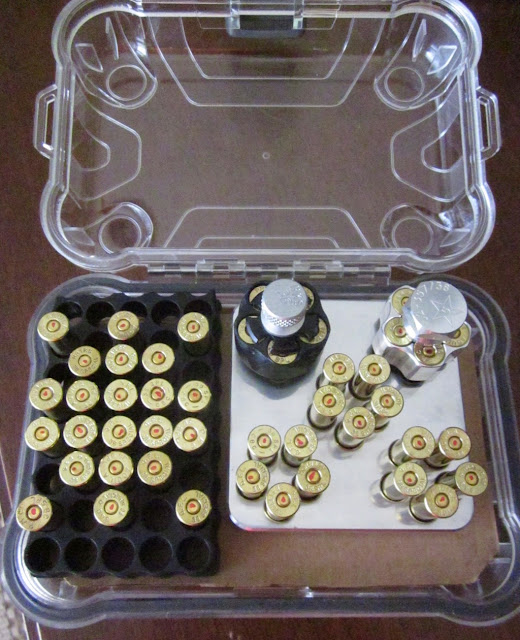 The rounds are reloads (which i've marked as heavier than normal, using a red Sharpie on the primer). A couple sheets of cardboard raise the level of the tray and block so that rounds are keep neatly inside and won't fall out during transport.

The only problem with using the speed loaders and loading block is that it makes shooting so fast and easy that a box of ammo disappears quickly! 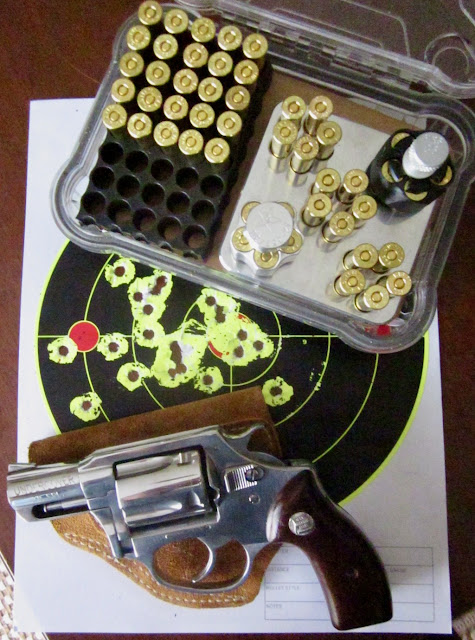 I'm having a lot of fun with this revolver! Charter Arms also sells a $25 hammer for converting your Undercover (and other revolvers) to double-action-only. It's stupid simple to replace the hammer:

I like my Undercover configured this way, and it only took a little work to polish up the new spurless hammer to match the high-polish finish of my revolver: 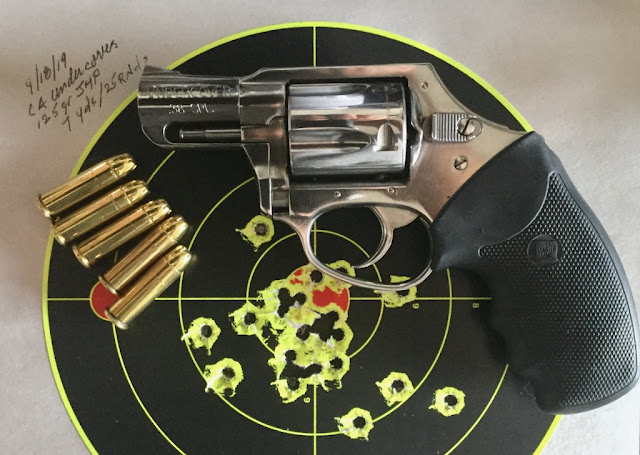