Tips, Traps, and Tricks of the Ruger New Bearcat Shopkeeper 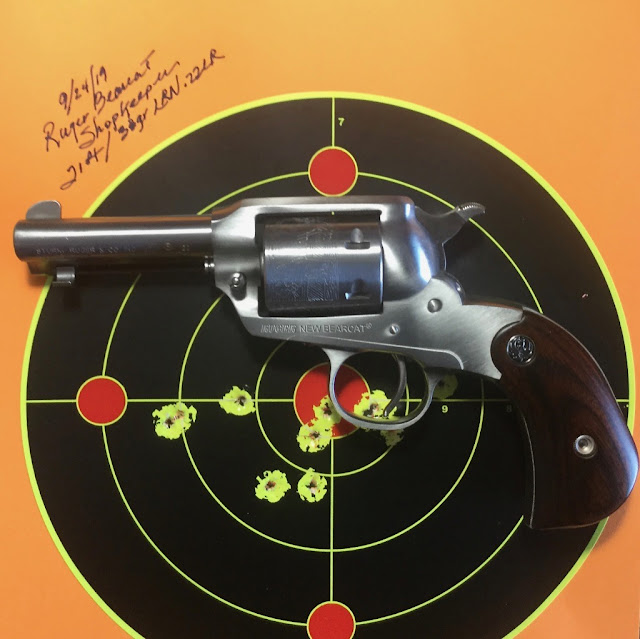 Then I was bitten by the wheelgun bug. There's something about wheelguns that I like. The simplicity. The convenience. The one-on-one challenge for accuracy. The zen of loading, shooting, cleaning, and maintenance. The ability to personalize in style, fit and carry.


One thing I've noticed is that in most on-line reviews, pictures of the ejector rod's half-moon finger piece show the finger piece moving all the way to the rear.

This originally couldn't happen on my Shopkeeper, as the ejector rod spring would not compress enough: 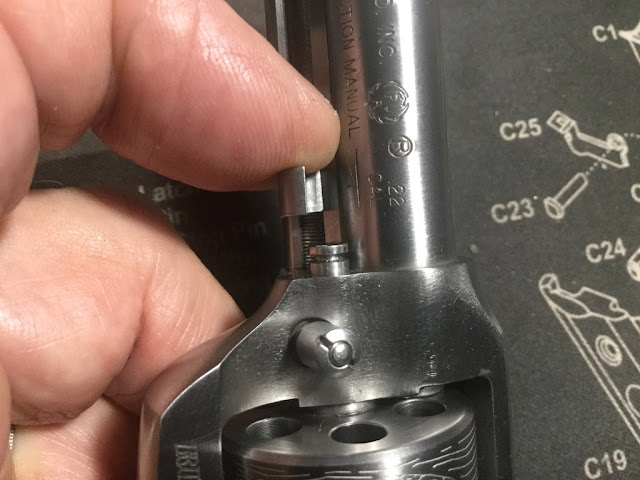 
One fellow gunslinger on RFC suggested that an ejector spring for a 4" Bearcat had been installed. I subsequently ordered one ($10+s/h) and then compared it to the installed spring. Nope, my Bearcat came from the factory with a 'purportedly' shorter spring. Here is the original spring as installed (the replacement was 4"): 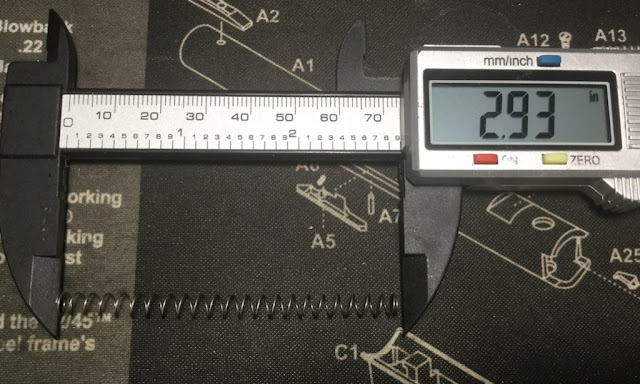 So I subsequently removed the shorter factory spring, put it away in the Ruger case for safekeeping, then clipped and installed a shortened replacement spring: 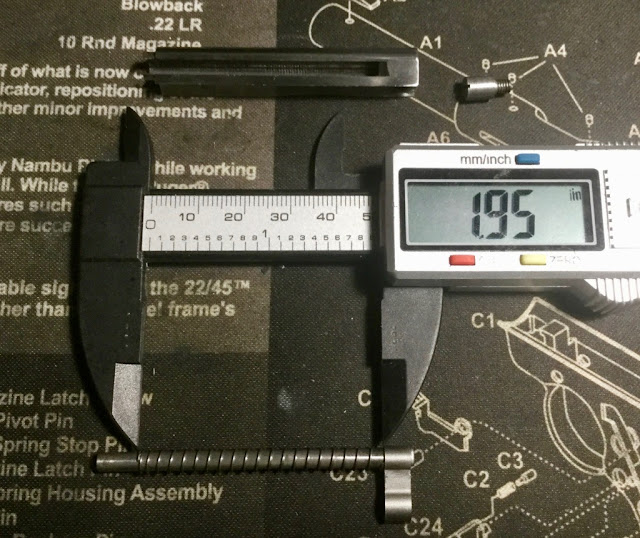 The original spring only allowed clearance as shown here: 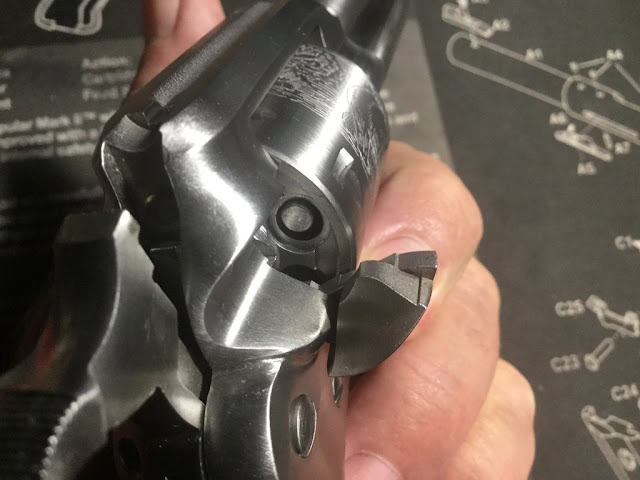 The result of installing the clipped replacement spring is that the business end of the ejector rod protrudes one-eighth of an inch more out of the cylinder chamber. This makes for more efficient ejecting of empties with no modification of the ejector housing or use of a modified ejector rod: 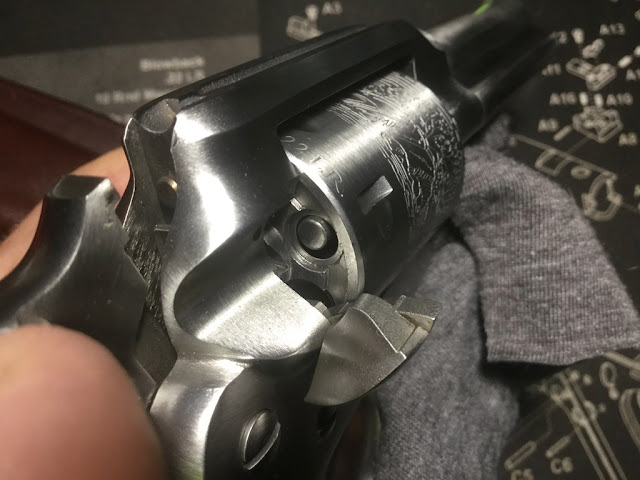 My ejector rod's end is slightly beveled all around, not sharp-edged. I was initially worried about how it would work but went to the range for an initial fit and function, and ran 120 rounds of assorted ammo.

My Shopkeeper was flawless. I was even able to achieve a small bit of accuracy right off the bat - but make no mistake: shooting a single-action revolver with a short barrel and iron sights is a challenge.

Best ammo was CCI Minimags for accuracy. Opening the gate, putting the wheelgun into half-cock, then rotating the cylinder to have the rod slide along the trailing edge of each cylinder chamber worked just fine for extraction, and I was soon zipping empties onto the bench top.

There are some nice touches here, such as the laser-engraved cylinder. I think it's funny that some folks are paying gunsmiths to remove these 'rollmarks': 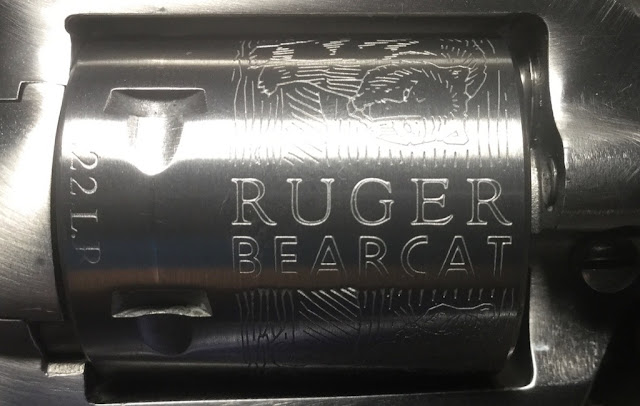 The Shopkeeper even comes with a handy finger-slicer built in - LOL! Of course the secret to not hurting your fingers is to properly hold the gun for extraction. I open the gate, put the gun into half-cock, then hold the gun in my left hand, turning the cylinder while at the same time pressing down the extractor with my index fingernail (making sure that the muzzle is, always, pointed down range).

TIP: You don't even need to look at your Shopkeeper while using the ejector. Place the hammer in half-cock, open the gate, then rotate the cylinder until you feel a 'click'; this indicates you're all set to eject, and the ejector rod will be in the right place alongside the trailing chamber wall to catch the lip of the empty case. Try it!

If you get the hang of it, you'll soon be handling your Shopkeeper safely like a long-time pro: 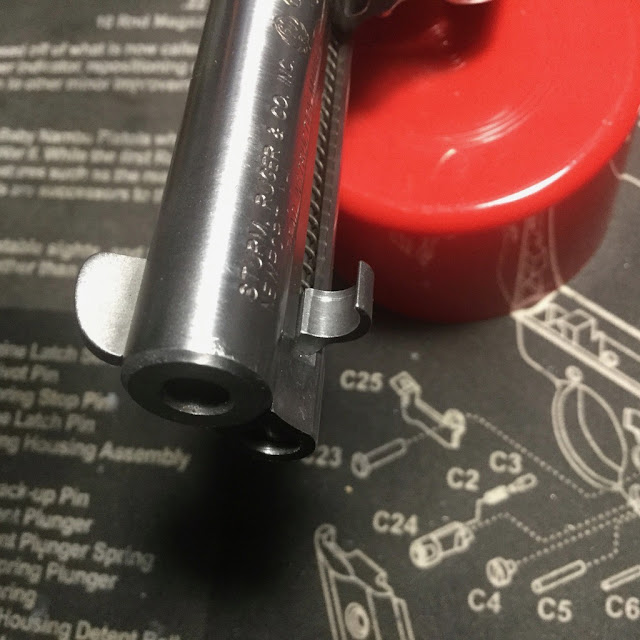 One tip: always ensure that your cylinder pin is firmly and properly seated. This will avoid any problems with alignment: 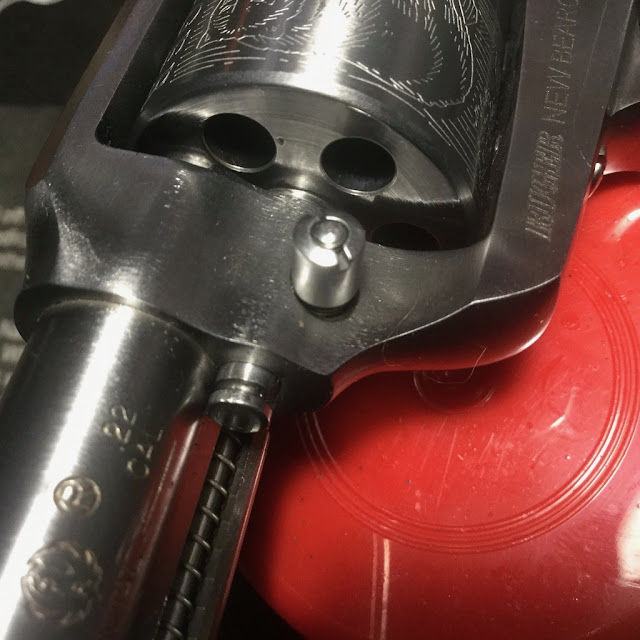 One thing I always seem to do on all my guns with iron sights is to deploy a daub of fluorescent lime-green acrylic paint from my $2 Wally World paint pen (found in the fabric section): 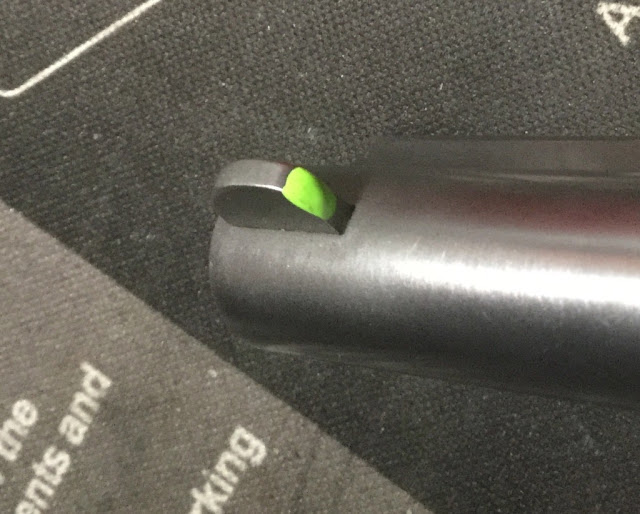 If you're interested in the Shopkeeper, but worried about all the problematic reports (most of which seem to center around the 2013 time-frame concerning cylinder chamber diameter, or OCD owners disappointed with grip sizing and fit) - don't worry! Ruger will make things right for any problem with your plinker, but there is little to go wrong with this single-action. You may find a timing mark on the cylinder face, and a factory smith is required to fit the action before the gun leaves the factory.

Important ShopKeeper Tips, Tricks, and Traps - How to Avoid Lockup


I found no problems with my Shopkeeper. Here are a few tips, tricks and traps I've learned as a new single-action rimfire wheelgun owner:

1. Read the manual! This is essential if you want to use your new gun properly.

2. In particular, pay attention to the proper COCKING! Here's the relevant info from the manual, found on page 15:

And not only will the cylinder be out of index, but you may experience the dreaded 'lock up,' that some folks complain about! I have found that you can indeed lock up the action if you do not ease the hammer forward. You can do this from the half-cock and loading or unloading:

- after the gate is closed, ensure the cylinder is rotated counter-clockwise
- pull back slightly on the hammer while at the same time very slightly pulling back on the trigger
- when you feel the hammer release, take your finger off the trigger and ease the hammer forward

3. You can also experience a slight 'lock up' if your cylinder chambers get too dirty while shooting. This can happen at any point, especially if using lousy ammo, like Federal bulk or American Eagle (in the 40-round boxes). If you want to pretend you're shooting black-powder revolvers, fine, but this shit is simply awful: 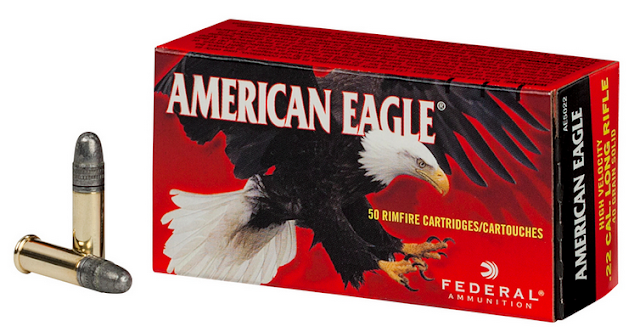 What happens is that you'll be unable to fully seat the rimfire cartridges, and the rotation of the cylinder will be impinged by the outsized cases. You can also run into seating problems by first shooting shorts or longs, then switching to long-rifle ammo.

TIP: Take a small bore brush with you and clean out your cylinder chambers somewhat to continue shooting. And try not to mix ammo types during extended (100-round+) range sessions.

4. If by the off-chance that you do experience lock-up, you will need to remove the cylinder by depressing the latch button and extracting the cylinder rod. BE CAREFUL IF YOU HAVE AMMO IN THE CHAMBERS!


I like to have a Ruger holster for each of my Ruger wheelguns. The sky is the limit if you want a good holster for your Shopkeeper. Prices range from all the way on the low end for a nylon waistband version all the way up to a custom Western-style leather. 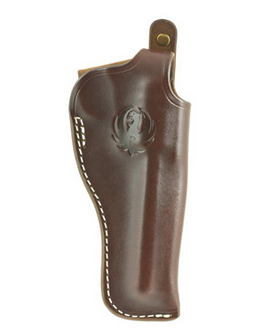 This is similar to my other Ruger holsters for my SP101s. Unfortunately, Ruger does not offer a holster specifically for the 3" barrel Shopkeeper. The good news is that there is a much-better fitting and more appropriate Western-style holster available at a reasonable price-point: the Triple K #675: 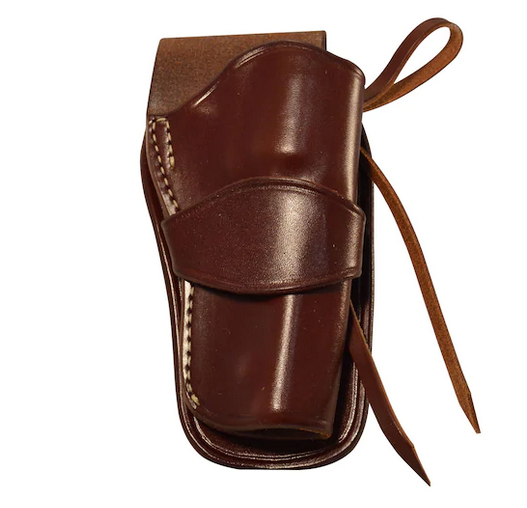 This holster is a great match for this little single-action. You may not be a fan of the leather thong strap for securing the hammer, but it works fine for me: 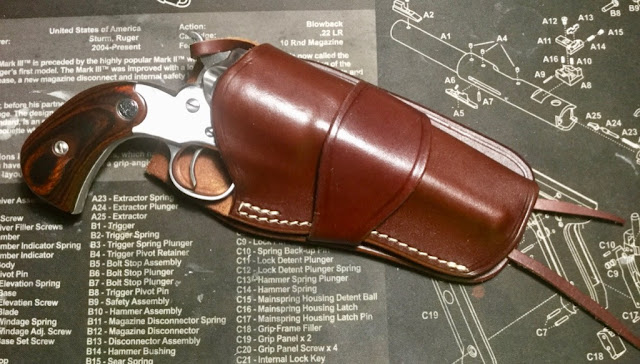 I hope you enjoy your Shopkeeper. I have now put more than 500 700 rounds through the gun and enjoy shooting it. Here's a recent range pic using three cylinders of CCI Mini-mags: 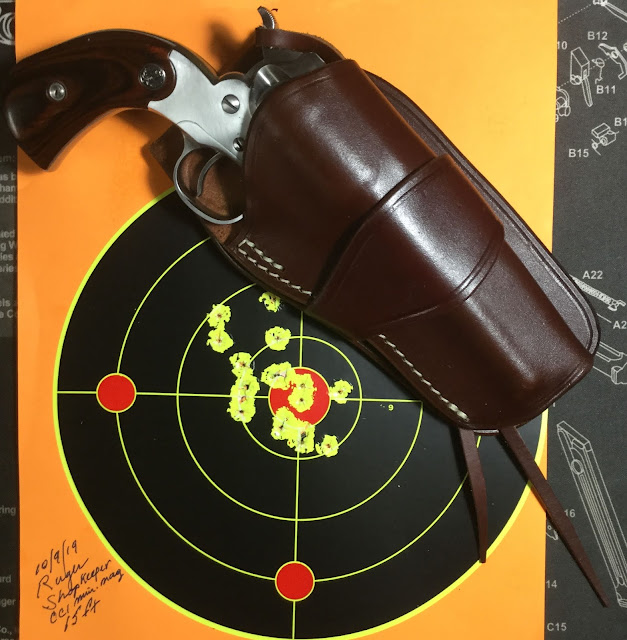 It's a nice companion to my small 100+ year-old Smith and Wesson Safety Hammerless: 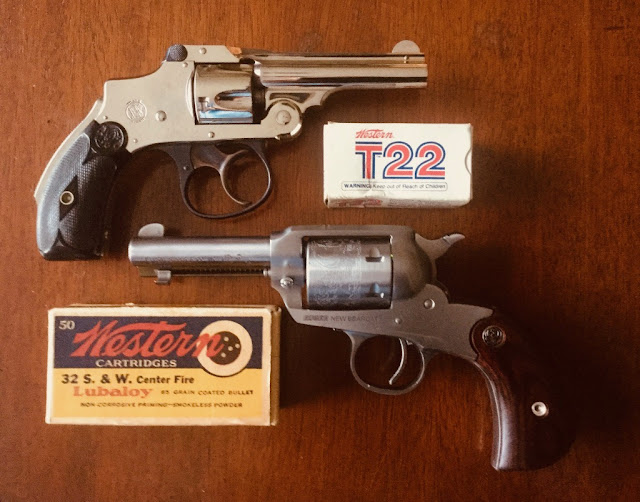 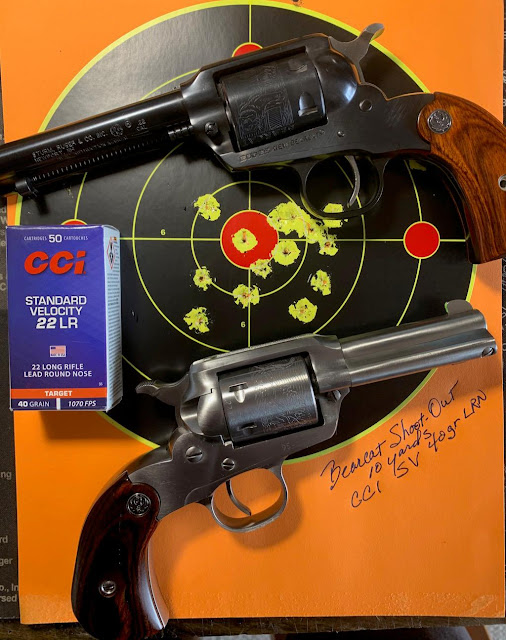 
I was somewhat frustrated when I first started shooting my Shopkeeper. I though there must be something wrong with the revolver, as I was getting inconsistent groupings, flyers, and bullets didn't seem to be hitting to point of aim.

Finally, after more than two bricks of various ammo, I went to the range and set up 4" bulls at 15 feet. Standing steady with a firm grip on the Shopkeeper, I aimed at the bulls with the sights lined up underneath the bullseyes with both eyes open, and slowly squeezed the cocked trigger, making absolutely sure to pull straight back. 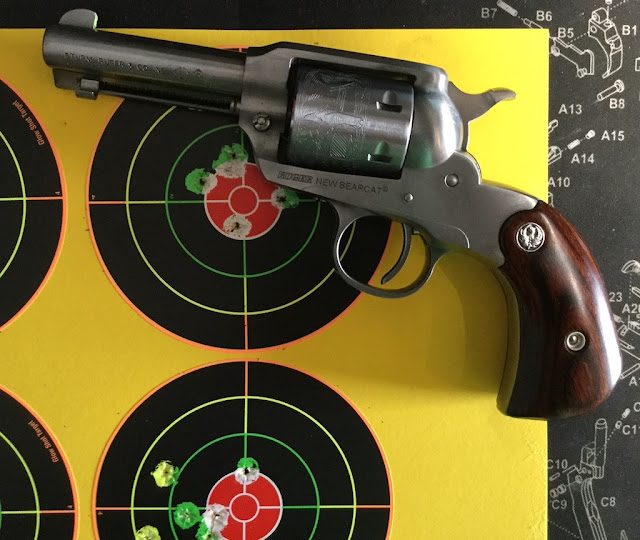 I think I'm finally getting a handle on single-action iron-sight shooting with my Shopkeeper.

It's a [Shop]keeper for sure!