I recently ran across a pack of snubbies for sale at my local reman ammo manufacturer. Two of them caught my eye, so I bought one and brought it home with me (along with a 1,000 rounds of .38SPL 142gr JHP for $200). This page is my overview and observations regarding these two revolvers, the Model 60 no dash and the Model 637-1; much has been written about them and other Smiths, so I'll pass on the specs, and will only point out what I've learned and some of the highlights.

I hope this info will help some fellow shooters who may be new to snubby revolvers. My feeling is that while the era of polymer-framed semi-autos has made pistols for self-defense or recreational shooting very popular and more affordable nowadays, there may be some resurgence in single- and double-action revolver shooting and carry, and more interest in old-school, vintage designs (Rugers notwithstanding, which are totally different from Smiths): 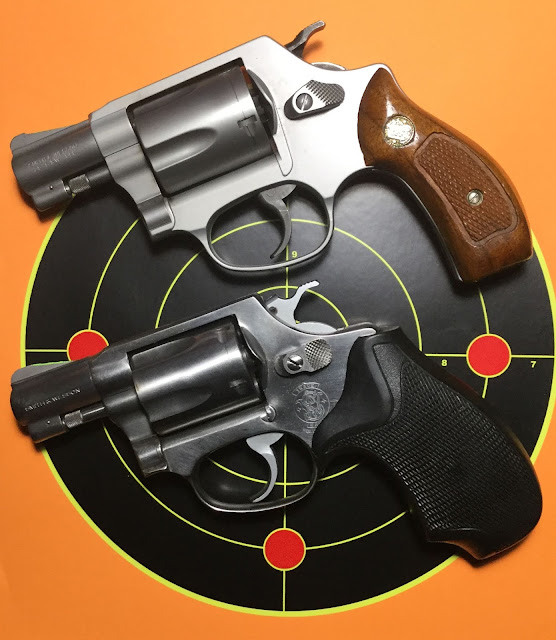 The Model 60 No Dash


Here are two reasons I like the Model 60: all-stainless construction and fewer internal parts due to no insipid internal lock: 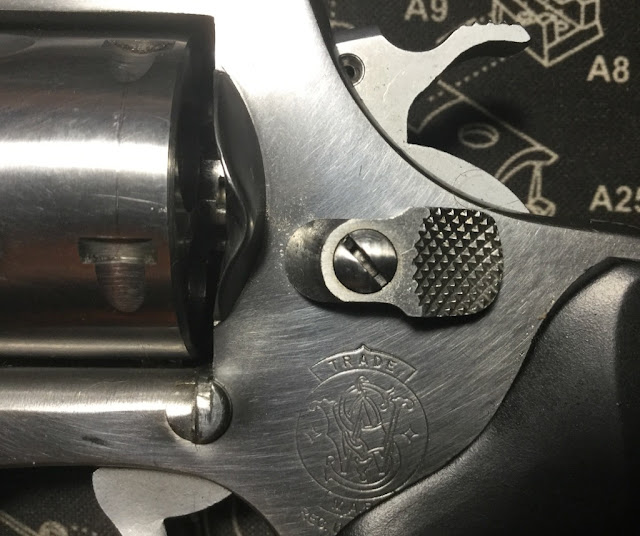 The model number is stamped inside the crane, while the serial number is stamped on the butt. Note that there is no dash to indicate a change in manufacturing or specs. My Model 60 dates to a year of 1984 or 1985 manufacture. It is a fine example of a stainless version of the Smith Model 36: 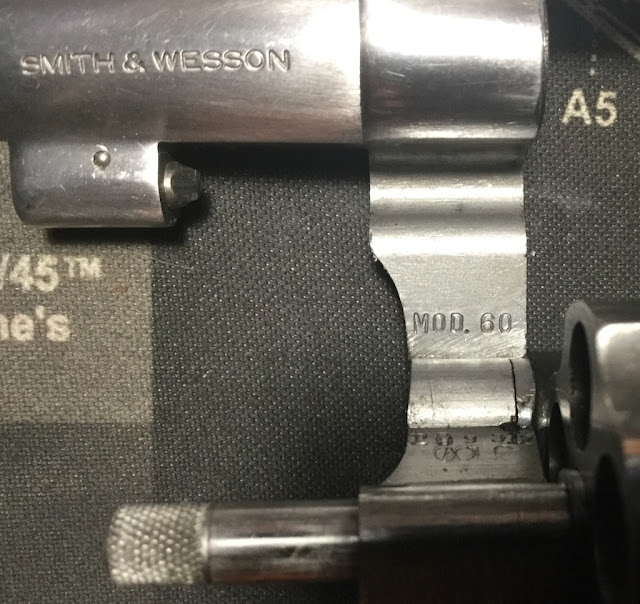 Here is the right side of the barrel, which is not pinned. Note that I've slapped some fluorescent lime paint on the front sight's ramp using a Wally World fabric pen: 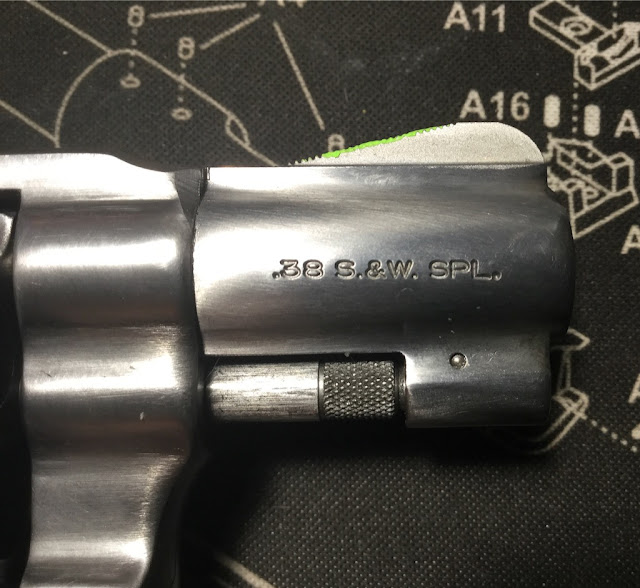 Here is the origin and manufacturer info; the four lines was later changed to a simpler two-lines the next model or so (I forget when). The screw shown next to the text is used to enable removal of the crane/cylinder for cleaning: 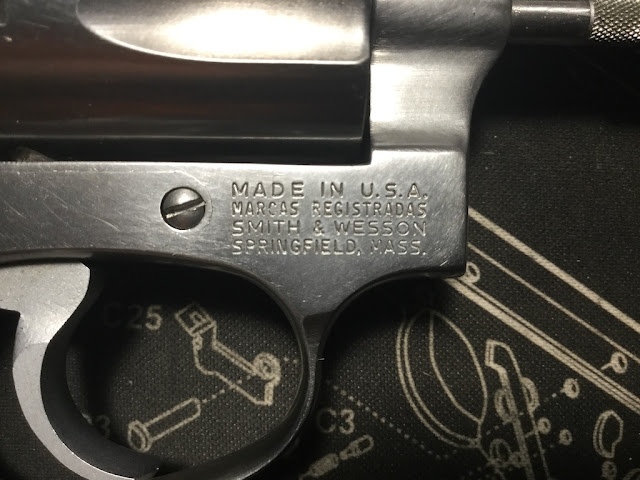 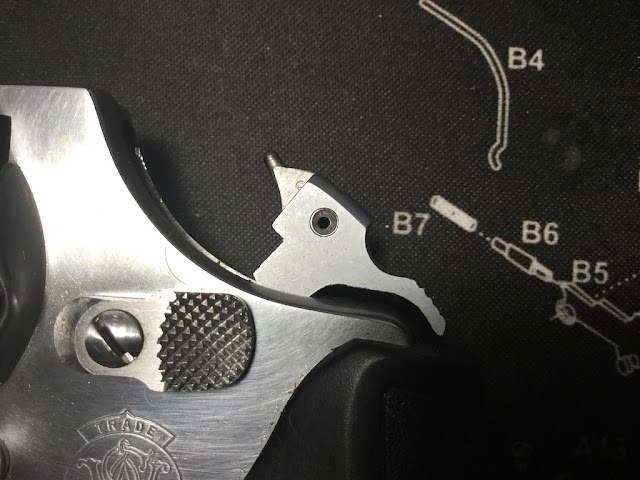 All Smiths since 1945 have a hammer block (there are also internal mechanisms, such as the rebound slide). This means you can carry this revolver fully loaded:

There is a downside to the Model 60: It weighs nearly a pound and half unloaded (although only two ounces more than a current-product Charter Undercover revolver, which is also stainless with the same capacity). This means that the 60 is a bit outside my comfort zone for pocket carry, as I don't want to look like a gang-banging homey with droopy drawers. My 60 came with these Pachmayr grips, along with the original wood grips, so I may do a re-weighing with the wood grips: 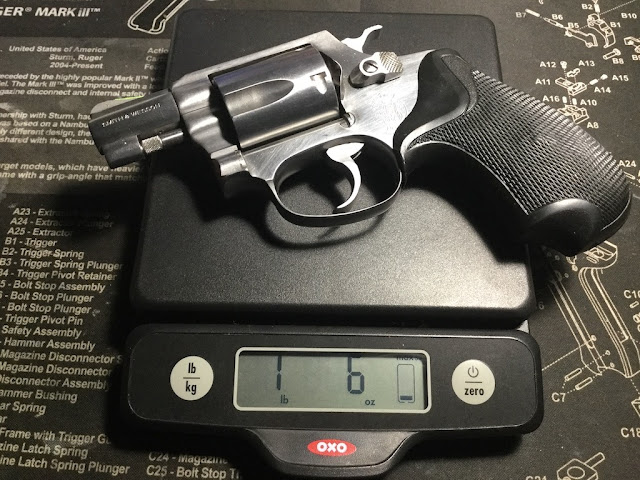 Cleaning a Smith revolver is usually quite simple: empty the weapon, unscrew a frame screw located on the right side of the frame below the cylinder, then unlatch and slide the crane forward and separate the cylinder from the crane. Scrub away to your heart's content using some CLP and a nylon bore brush and let sit for a bit before swabbing and polishing clean.

I was also fortunate to find a Model 637 on the same day as the Model 60. Of course I immediately purchased the Model 60, but then, after some thought, went back a day or so later and purchased this Airweight: 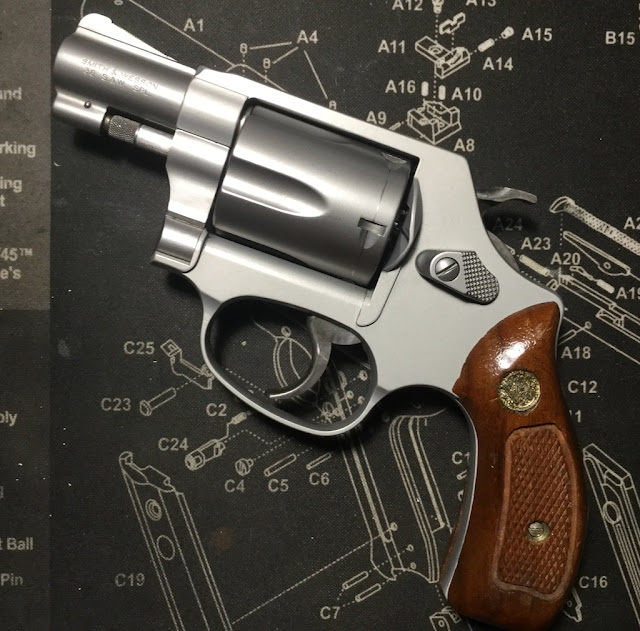 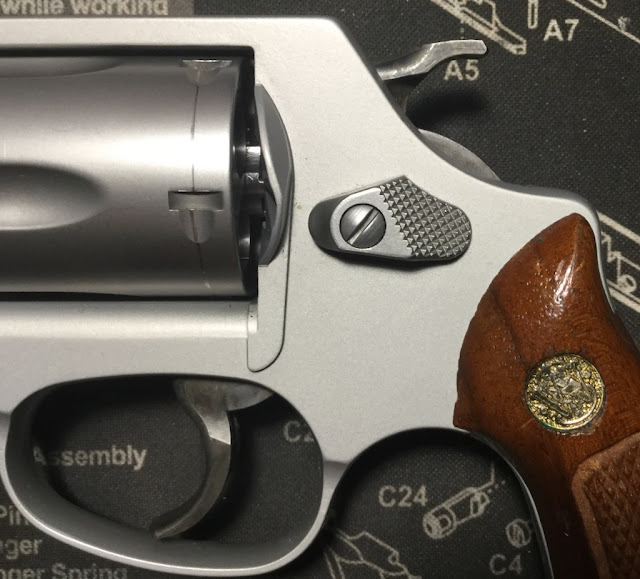 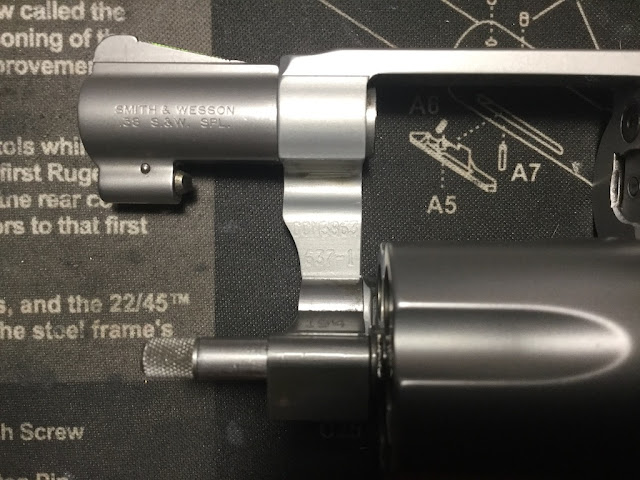 The 637 also came with a Master Lock gun lock, which AFAIK was only done for one year: 1997. The -1 attached to the model number also denotes that this revolver was the first in a line of +P capable Airweight revolvers, even though not marked as such on the barrel, and does not have a pinned barrel. (I believe Smith stopped using pinned barrels in 1982.) There is some debate, but some folks surmise that incorrect torque on barrel installation at the factory led to premature frame failure on some of these alloy-framed revolvers. I detected no crack on the underside of the frame by the chamber.

Where to Check for a Cracked Airweight Frame 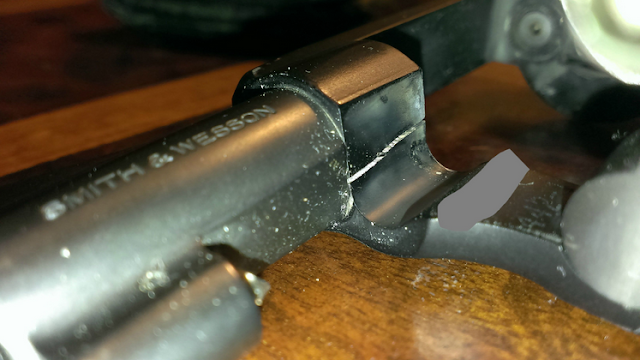 A reputable LGS will not sell you a used Airweight with a damaged frame. However, I'd be wary of any pawn shop fare. Always carefully example any used weapon before purchase! 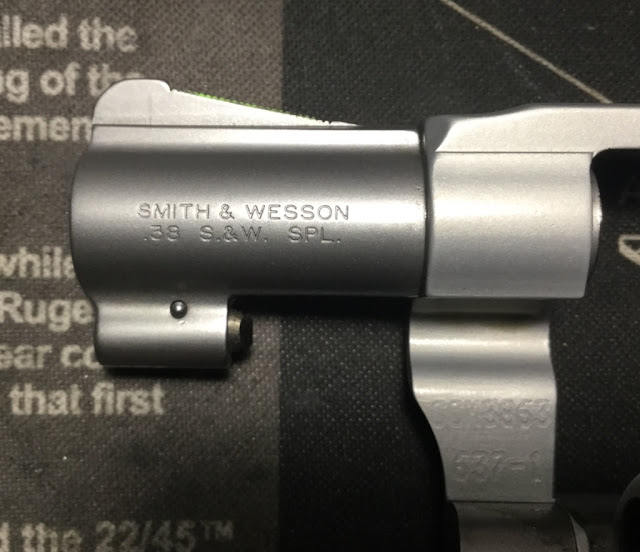 And also note that there is nothing on the right side of the barrel: 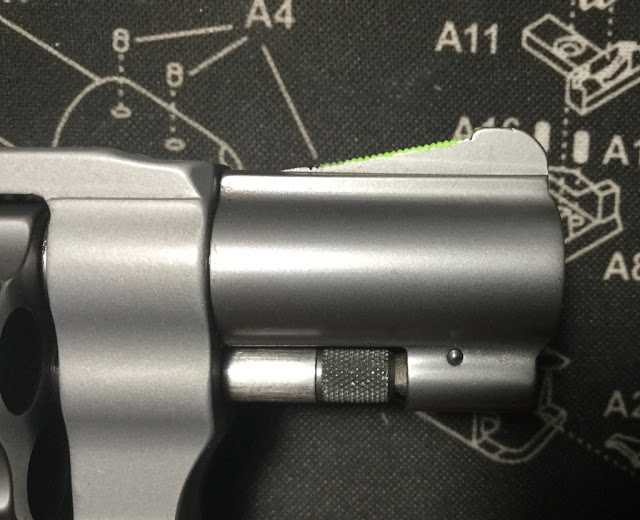 This 637's serial number denotes a 1997 manufacture - just in time before Smith's sell-out to the Federal government. I think Smith revolvers with no internal lock are going to become more desirable; many collectors and/or shooters do not want revolver models with an internal lock. Other revolver lines with internal locks includes all Taurus models - a company with terrible customer service that does not sell any parts to owners - and many post-1997 Smiths.

Again, lettering was changed to two lines in the next year: 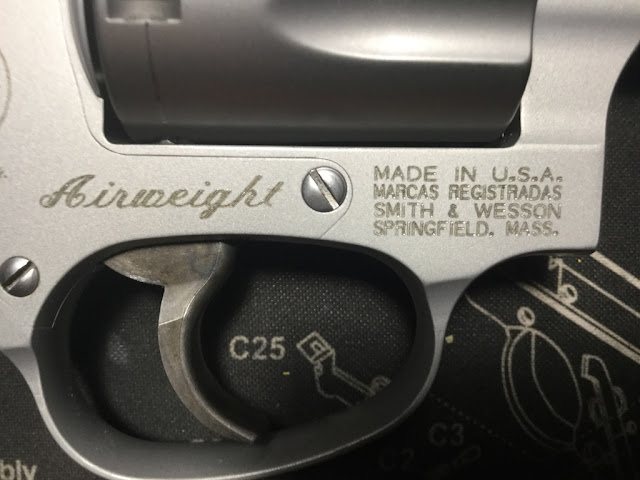 This 637 has a flat-faced hammer with a frame-mounted pin. Note the hammer block (which is not a transfer bar, such as that used in Ruger revolvers!): 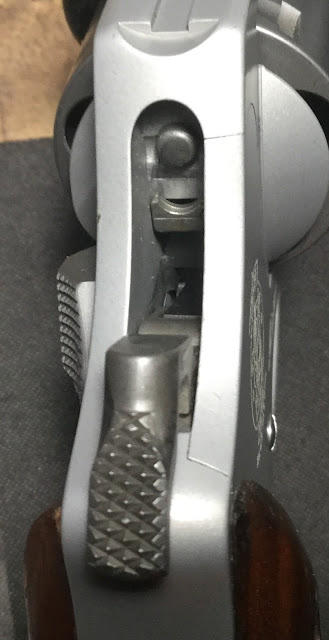 This 637 is destined for pocket carry. It is compact, fits inside a Grovtec holster and weighs only 13-and-a-half ounces unloaded: 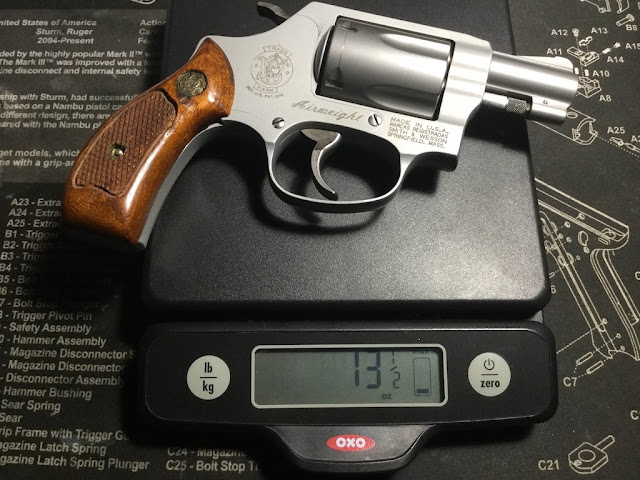 Range Report for the Model 60


Went to the range and ran 75 rounds of some locally fabricated reman ammo in .38SPL 142gr FMJ: 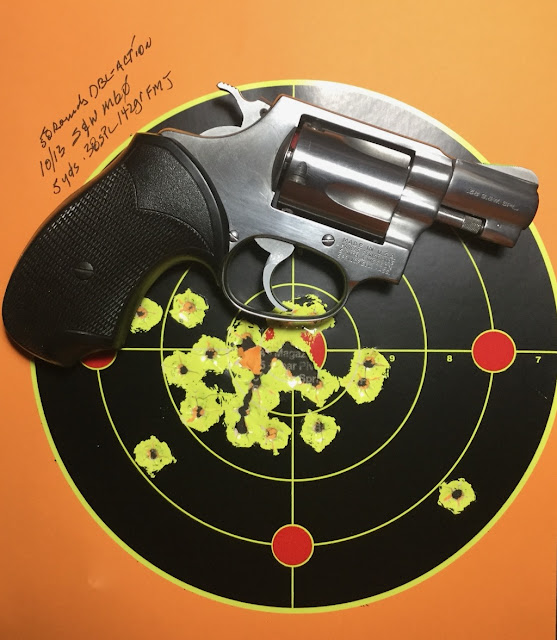 Ignoring the 5 o'clock flyer, I think the 60 ran pretty well in double action. This is the way these snubbies should be shot IMHO, although the single-action pull was much lighter.

Pull Weights for the Model 60


Using my trusty stainless 15-lb fish scale, I measured the following pull weights for my Model 60:

There is room for improvement here. It may also indicate that either the previous owner did not shoot the revolver much or had stronger hammer and/or rebound slide springs installed. I have not opened up the revolver, but may take a quick look to see if some lubrication is needed. I don't think I want to mess with the action just yet.

Range Report for the Model 637


Here is a range pic of the first 15 rounds through my new [old] 637. Quite accurate to POA for my needs, and I was pleased to discover that recoil was not a problem whatsoever (of course, I could be used to double-action and .357 loads in my Ruger SP101s). 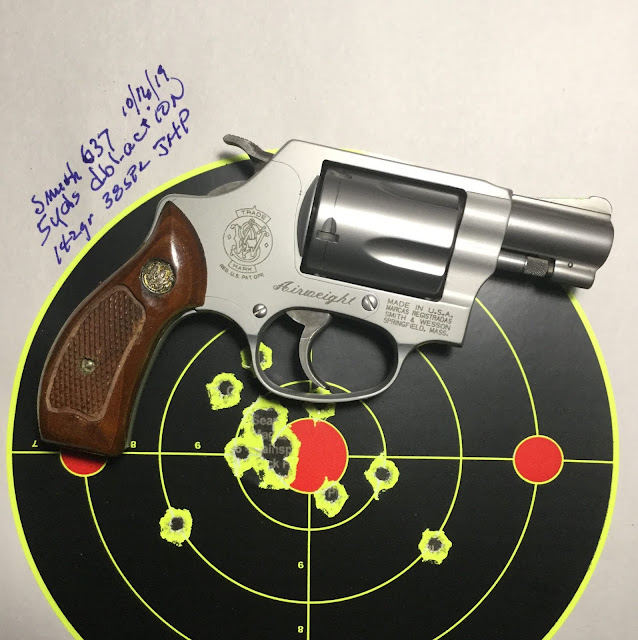 
Again using my fish scale, I measured the following pull weights for my Model 637-1:

As you can see, this Smith - which appeared to have little use at all - has significantly lighter pulls than the Model 60. I don't think I'll venture to make any improvements on this revolver's action.


I am very pleased to be a new owner of these modern, yet older pre-lock Smiths. They are keepers, and won't be sold or traded in my lifetime. I may also be on the lookout for similar Smiths, such as the 642. Smith and Wesson does make no-lock variants of these double-action only revolvers, but I would prefer to find a used one in good shape. This may prove difficult if the popularity of wheelguns continues to grow. And I would really like to see a resurgence of cowboy action shooting!